News out of Washington is that Democratic leaders may be coalescing around a plan to finish health care reform.1

But conservatives are pushing back hard. The Senate GOP is threatening a "free for all" of amendments to derail the process, while Sen. Chuck Grassley has promised partisan "war." And a handful of conservative Democrats, like Evan Bayh, are echoing GOP opposition.2

It's time for all Democrats to show bold leadership, stand up to the threats, and get reform passed—and they need to know that voters are counting on them to make it happen.

We put together a flyer that sends just that message. Can you stop by Senator Chuck Schumer's office in New York today or later this week to deliver a flyer and tell your senator to fight to finish health care reform?

Get the address and all the details by clicking here:

Yes, I'll drop a flyer off at Chuck Schumer's office 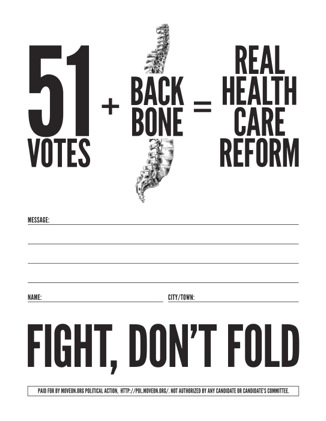 We know from firsthand reports that in-person deliveries like these definitely get noticed and relayed back to the senator in Washington.

There's a clear path to finishing reform, and finishing it right. Through a process called "budget reconciliation," Senate Democrats can fix the health care bill and pass real reform with just 51 votes.3

But opponents of real reform are determined to stop it. Make sure your senator knows you're counting on Democrats to fight, and get health care reform done.

Can you drop by Chuck Schumer's office in New York today or tomorrow?

Yes, I can drop by Chuck Schumer's office

–Kat, Wes, Lenore, Ilya, and the rest of the team

PAID FOR BY MOVEON.ORG POLITICAL ACTION, http://pol.moveon.org/. Not authorized by any candidate or candidate's committee. This email was sent to eddie alfaro on February 2, 2010. To change your email address or update your contact info, click here. To remove yourself from this list, click here.