This week something really important happened—but you may not have even heard about it.

For weeks Republicans have been blocking Wall Street reform.

But this week, Senate Democrats led by Harry Reid stood up to them in a big way. He made their opposition visible. He forced Republicans to vote again and again to block reform, exposing the fact that they were siding with the banks. He was even ready to keep them in session all night long. And he won!1

It would have been easy to give in, cut a deal and weaken reform, and many of us have been frustrated when that's happened in the past. But this time, Senate Majority Leader Reid and the Democrats did the right thing.

When our leaders do the right thing and show us the kind of fight voters are looking for, it's important to let them know we noticed. Can you sign this "Thank You" card to Harry Reid and the Senate Democrats? We'll deliver it to them next week. 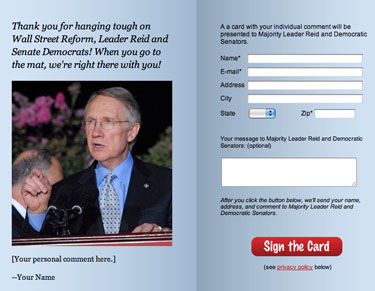 –Nita, Daniel, Ilyse, Adam, Wes, and the rest of the team

PAID FOR BY MOVEON.ORG POLITICAL ACTION, http://pol.moveon.org/. Not authorized by any candidate or candidate's committee. This email was sent to eddie alfaro on April 30, 2010. To change your email address or update your contact info, click here. To remove yourself from this list, click here.