Because you've subscribed to the Ready to Resist call series, we'll call you this Wednesday at 8 p.m. ET to join the national organizing call with Sen. Bernie Sanders to defeat the Trump tax scam

The Ready to Resist call—our series of national organizing conference calls—is back, this time with Senator Bernie Sanders!

Because you've subscribed to the Ready to Resist call series, we'll call you this Wednesday at 8 p.m. ET (7 CT/6 MT/5 PT) to join the national organizing call with Sen. Bernie Sanders to learn how we can defeat the Trump tax scam and to celebrate progressives' big election wins last week in Virginia and across the country.

And with news breaking this afternoon that the Senate's tax bill now includes a repeal of the health care individual mandate—which means 13 million would lose their health care by 2027 and rates for others will skyrocket—this call is an important opportunity to discuss strategy and move into action. This tax bill is now also the return of Trumpcare, but we can stop it if we organize.

Check out the great lineup of speakers on Wednesday's call:

If you'd like to join the call, you don't need to take any action now; just mark your calendar to receive a phone call from the 202 area code tomorrow, Wednesday, November 15, at about 8 p.m. ET (7 CT/6 MT/5 PT)! If you'd prefer to listen via your computer, just visit moveon.org/readytoresist at 8 p.m. ET (7 CT/6 MT/5 PT) tomorrow, Wednesday, November 15.

If you'd like to RSVP for the call with a different phone number than the one you may have originally RSVP'ed with, click here to update your subscription on this form.

If you know you can't join the call, not a problem; no action is needed.

And please help spread the word about the call!

Republicans in Congress are racing to pass their tax scam—a massive giveaway to millionaires, billionaires, and corporations at the expense of everyone else. And they are trying to push it through the House this week, with the Senate following soon after.

Fortunately, there are actions we can take to stop this nightmare—just as we stopped Trumpcare again and again—but we have to act now.

That's why MoveOn is joining with Senator Bernie Sanders and People's Action, the Center for Popular Democracy, and the Working Families Party on a national organizing call this Wednesday, November 15 at 8 p.m. ET (7 CT/6 MT/5 PT) to discuss how we can confront and defeat this bill together. 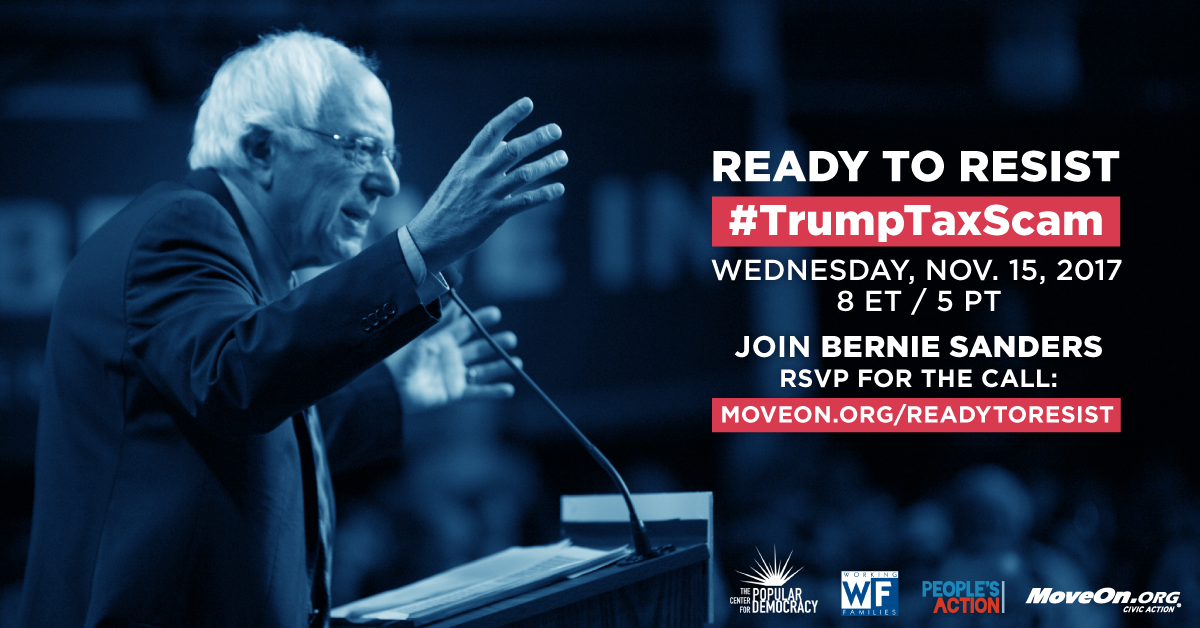 Here's how bad this tax scam is: This bill would

Republicans don't need a single Democratic vote to force it through the House and Senate. But we've seen these odds before—and beaten them.

This is the same scenario we faced with Trumpcare—and we accomplished the impossible. We overcame the odds and stopped a horrific bill that would've hurt regular Americans for the sake of giveaways to the rich.

On this Wednesday's call, we'll hear about the strategy to defeat this Republican scheme—from Sen. Bernie Sanders who will share the stakes of the fight, and from organizers who will talk through how Americans everywhere can effectively plug into this campaign in the critical weeks ahead.

Click here to RSVP for the Ready to Resist call on defeating the Trump Tax Scam—with Sen. Sanders and other guests—this Wednesday, November 15. You can join by phone or by computer.

This is the latest in the Ready to Resist series, which ran 15 Sunday-night national organizing calls through the spring and summer.

So join the call—then join us in the streets, on the phones, and over social media as we fight to defeat the Trump Tax Scam.

–Sunjeev, Emma, Ben, Gabriela, and the rest of the team

P.S. Fired up to defeat the Republicans' bill? In addition to joining the national call Wednesday night, you can also sign up to host a "Tax Scam Caroling" accountability action between Wednesday, November 29 and Saturday, December 2—a critical week when Republicans will be trying to vote on their bill. MoveOn members and allies will be hosting events to stand up to the scrooges behind this morally bankrupt tax scam at a key moment when our actions could stop it. Just click here to host an event near you—MoveOn staff and volunteers will support you every step of the way.