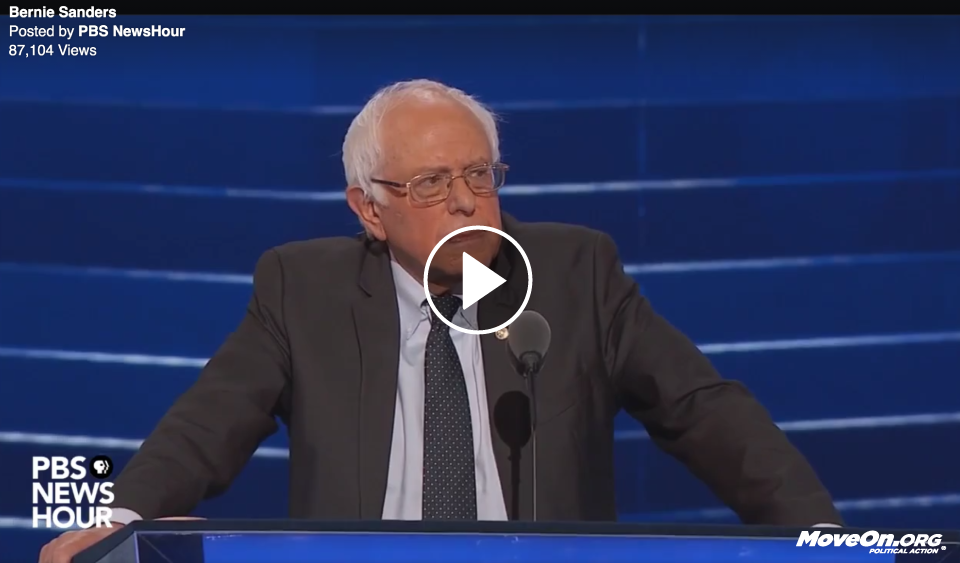 A higher minimum wage, debt-free college for all, a public option for health care, serious work combating climate change, and a push to overturn Citizens United—those were some of the issues many of us fought for by supporting Bernie's campaign, issues which Bernie spoke about from the stage last night.
"We produced, by far, the most progressive platform in the history of the Democratic Party," Bernie proudly declared. And now he's committed to fighting for that platform—both in this election and in the work in the Senate beyond November.
MoveOn members provided Bernie with his biggest grassroots endorsement at a key moment in the campaign. Now MoveOn members are ready to work tirelessly alongside Bernie to defeat Donald Trump and his divisive, bullying, hateful politics—by electing Hillary Clinton as we continue to fight for Bernie's agenda and ours.
Please watch and share this video of Bernie's speech to help people recognize the stakes and hear Bernie’s full-throated endorsement of Hillary Clinton—who he says will “make an outstanding president”—and his compelling call to action.
Thanks for all you do.
—Jo, Nick, Milan, Corinne, and the rest of the team
P.S. Not on Facebook? You can view Bernie's incredible speech on YouTube here.

P.P.S. Former Labor Secretary Robert Reich says, "As the biggest independent progressive group that supported Bernie Sanders, MoveOn is uniquely poised to help turn out those of his supporters who are most likely to stay home in November." Will you chip in $5 a month to help us work from now through Election Day to make sure progressive voters turn out to defeat Trump?