The last time the U.S. tried to implement a registry targeting Muslims, Kamal was almost deported.

The last time the U.S. tried to implement a registry targeting Muslims, Kamal Essaheb, who is currently the Director of Policy and Advocacy at the National Immigration Law Center, was almost deported. Now, after a vicious Islamophobic campaign in which Donald Trump said he'd "absolutely" require Muslims in America to register in a database, one of his top advisors on homeland security, Kris Kobach, may be trying to implement this registry once again.1,2 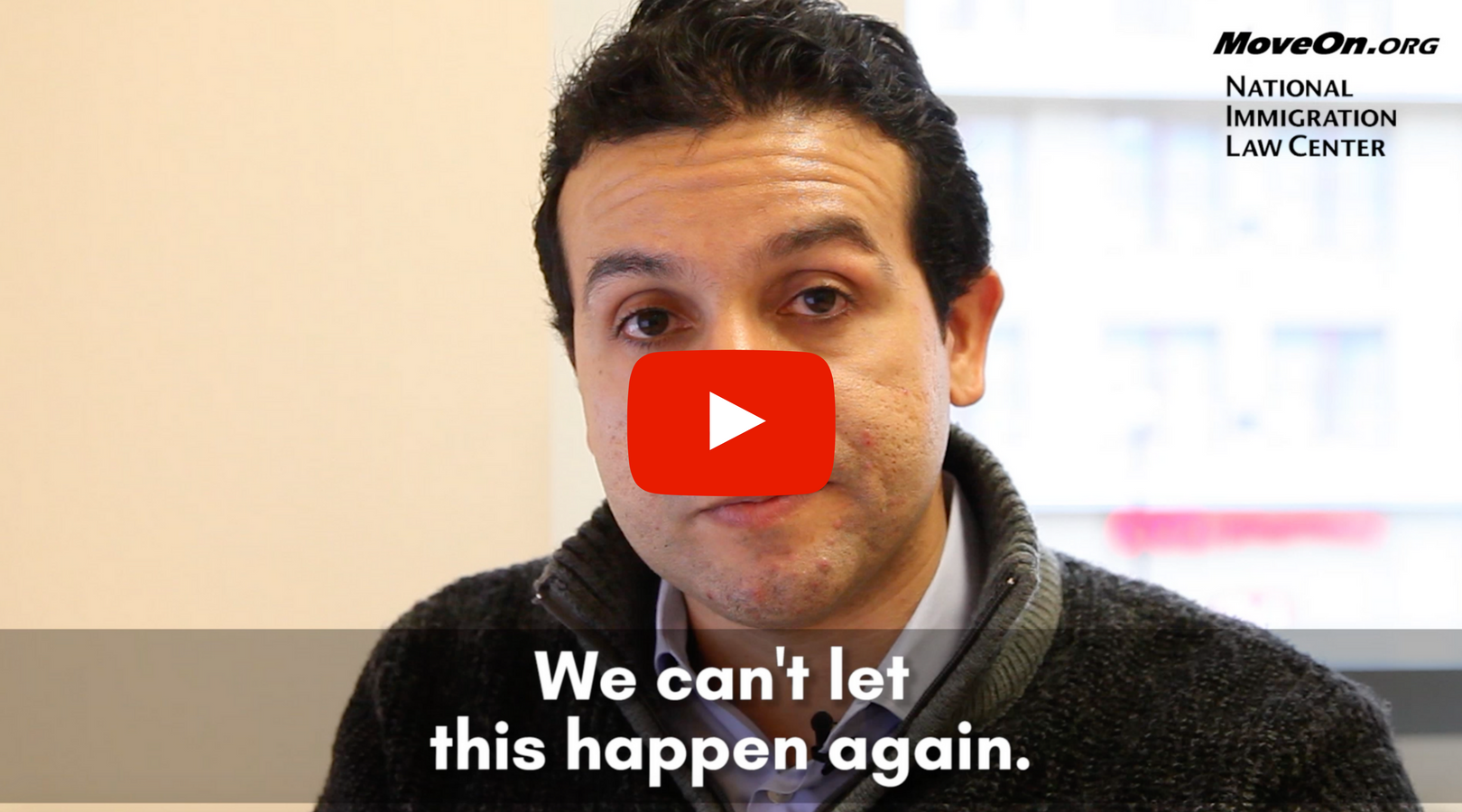 As it stands right now, if Donald Trump decides to start a registry program targeting Muslims, he doesn't have to start from scratch. The infrastructure from a Bush-era program called the National Security Entry-Exit Registration System (NSEERS) still exists and can be reactivated almost immediately. But President Obama has the ability to act now and dismantle NSEERS once and for all, which would force Trump to move slowly with his own schemes while facing public resistance.3

But President Obama's time to act is running out. That's why we can't wait.

On Monday, MoveOn members of all backgrounds are hitting the streets with Muslim leaders and allies in Washington, D.C., to call on President Obama to prevent Trump's Muslim registry and shut down NSEERS. And there are well over 120,000 signatures on our petition calling for the president to act.

Can you watch and share Kamal's story so more people know why we can't let a Muslim registry happen?

When NSEERS was implemented the last time, 83,000 immigrant men from Muslim-majority countries were registered and 13,000 of them were put into deportation proceedings. Out of all the registrations and deportations, no one was ever connected to any violent activity.4

Kamal's story is about just one of the 83,000 men who were impacted, whose lives and communities were changed. There are tens of thousands more we may never be able to hear from directly.

—Iram, Scott, Hannah, Mark, and the rest of the team

P.P.S. If you haven't yet signed the petition to President Obama, just add your name here.

Want to support our work? The MoveOn community will work every moment, day by day and year by year, to contain the damage of Donald Trump's presidency, to defeat hate with love, and to begin the process of swinging the nation's pendulum back toward sanity and decency and the future that we must never give up on. And to do it we need your support, now more than ever. Will you stand with us?

Contributions to MoveOn.org Civic Action are not tax deductible as charitable contributions for federal income tax purposes. This email was sent to Eddie Alfaro on December 11th, 2016. To change your email address or update your contact info, click here. To remove yourself from this list, click here.