The only witness against Richard Glossip—who Oklahoma plans to execute tomorrow—bragged about setting him up.1

That's according to information discovered just in the last few weeks and released yesterday by Richard's new pro bono lawyers. Richard had years of totally inadequate legal defense until his new team took over in July.2

Now, despite all of the new information, Oklahoma Governor Mary Fallin is still set to take this innocent man's life. 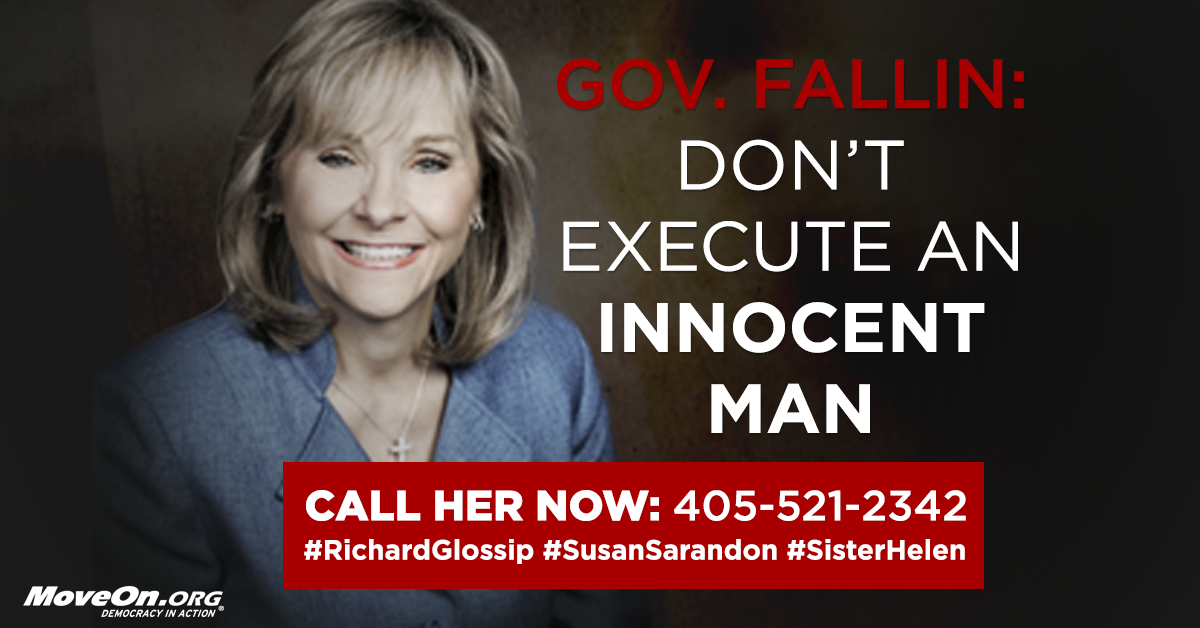 Not on social media? Can you call her office right now to stop the execution?

(It may take 30 seconds or more to hear anything after calling. When you hear the automated menu, press 2 to talk to the governor's receptionist, which is better than leaving a message on the governor's comment line, given the urgency. Call volume is high. So if you are unable to leave a comment the first time, try again.)

It's a race against the clock to save Richard's life.

He's set to be executed based on one man's word. The prosecutors even conceded, "The physical evidence doesn't directly implicate Mr. Glossip."3

When Justin Sneed confessed to the gruesome murder at a motel, he said Richard hired him to do it. In exchange for testifying against Richard, Sneed avoided the death penalty himself and now is serving a life sentence in a medium-security prison.4

Other new information released yesterday shows for the very first time that Sneed was addicted to methamphetamine and had been breaking into cars and rooms at the motel where Richard worked to buy meth.5

The confessed murderer "lied to save his own life"6—and now Richard, whose record was so clean he had never even gotten a speeding ticket, is scheduled to be executed by lethal injection at 3:00 p.m. tomorrow.7

We can't give up. Please share this graphic right now on Facebook and Twitter and ask your family and friends to share it as well. We need to increase the pressure on Gov. Fallin to stop tomorrow's execution.

Sister Helen Prejean, who has been at Richard's side, shared this from recent conversations with him: "When we talk, he always asks me, 'Sister Helen, what do you think is going to happen on the 16th.' I tell him, 'You are not going to die.'"8

–Mark, Manny, Brian, Victoria, and the rest of the team