Oklahoma will execute an innocent man at 3:00 p.m CST on Wednesday—unless the U.S. Supreme Court steps in now. That's why MoveOn members gathered outside the Supreme Court tonight to send this simple message: Save Richard Glossip.

In their emergency petition to the U.S. Supreme Court today, Richard's lawyers wrote, "New evidence, not fully considered by any court, shows that Mr. Glossip is innocent of the murder for which he faces execution."1

Check out the photo of tonight's last-minute appeal for justice, and then share it right now on Facebook. Together, we can draw more attention to the gross injustice that's set to occur—and just maybe help convince the Supreme Court to stop the execution. There's very little time left, and we can't stop fighting for Richard's life. 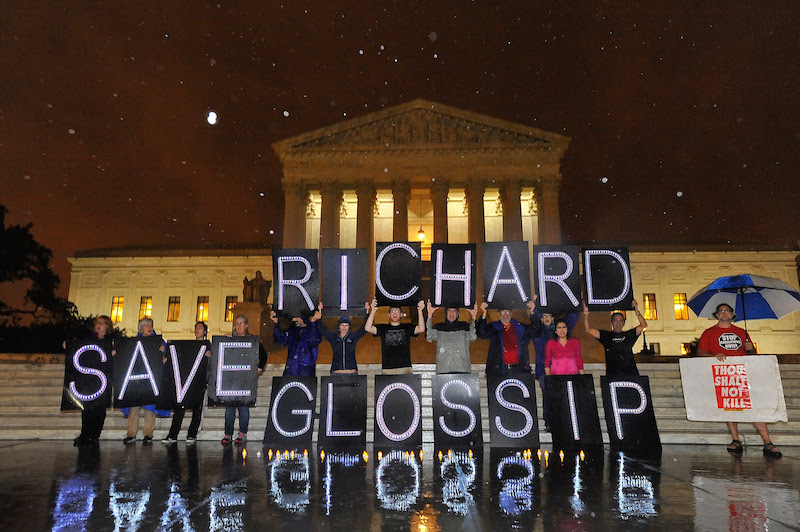 Not on social media? Can you forward this email to five friends?

Richard was sent to death row on the word of one man—who bragged about setting him up.2

Justin Sneed confessed to the gruesome murder at a motel, but he said Richard hired him to do it. In exchange for testifying against Richard, Sneed avoided the death penalty himself and now is serving a life sentence in a medium-security prison.3

But for 18 years, Richard hasn't had the resources to hire lawyers to prove his innocence. Only now is a team of pro bono lawyers working on his case—and what they've found is breathtaking, including witnesses who say that Sneed bragged about framing Richard and that Sneed acted alone. And the latest? The state has been intimidating those witnesses, even arresting one at gunpoint.4

Yet, the Oklahoma Court of Criminal Appeals yesterday ruled 3-2 to deny Richard's final appeals, and Gov. Mary Fallin continues to refuse to act.5

Hundreds of thousands of people across the country have added their name to petitions. Thousands more have made phone calls to key decision makers. And now time is up. We have one last chance to save an innocent man.