Right now giant defense contractors like Lockheed-Martin, Halliburton, and Blackwater are allowed to funnel taxpayer money from government contracts into lobbying and secret political contributions for their friends in Congress.

President Obama is taking on this perverse cycle by considering an executive order that would require corporations doing business with the government to disclose their political spending.1 That would be a good start but we need to do more.

In a new video, former Labor Secretary Robert Reich calls on President Obama to go further and ban all political spending by corporations that get most of their business from government contracts.

Check out the video and then sign the petition supporting a complete spending ban: 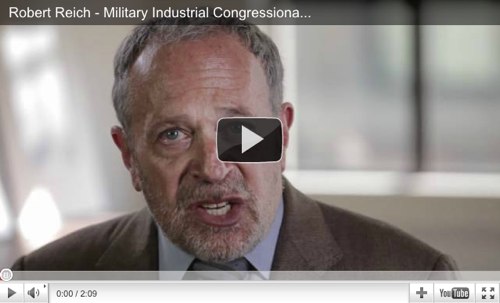 Secretary Reich goes over how the "Military-Industrial-Congressional Complex" uses our tax money to lobby and fund politicians who, in turn, award those same companies ever more lucrative contracts for high-tech weapons and private security forces.

It's a perverse cycle. Corporations that get most of their money from taxpayers shouldn't be allowed to spend that money backing candidates for office and lobbying in Congress.

The President doesn't have to wait for Congress to act. He can issue the order immediately and stop the flow of tax dollars into political and lobbying campaigns by giant government contractors.

Watch the video and ask President Obama to stop the political spending:

–Robin, Tim, Stephen, Sarah, and the rest of the team

PAID FOR BY MOVEON.ORG POLITICAL ACTION, http://pol.moveon.org/. Not authorized by any candidate or candidate's committee. This email was sent to eddie alfaro on May 27, 2011. To change your email address or update your contact info, click here. To remove yourself from this list, click here.