On Monday, Speaker John Boehner threatened to do something that he admitted would bring on "financial disaster not only for our country but for the worldwide economy,"1 unless Democrats meet his demands.


The ransom he wants in return for not doing it? Democrats have to agree to huge spending cuts. They have to start with cuts to Medicare, and they can't, under any circumstances, end any tax breaks for millionaires.2


At issue is the looming, must-pass bill to keep the U.S. from defaulting on its debts. But rather than negotiating in good faith, Boehner is threatening economic armageddon to gain leverage in his attempts to abolish Medicare.


President Obama is meeting with Senate Democrats today to plan their strategy, and they have to know we'll have their backs if they stand up to this Republican hostage-taking.


Can you call the White House right now, and ask President Obama to make clear to Republicans, and the country, that he's not cutting Medicare and he won't negotiate with hostage takers?


Then, click here to let us know what they said.


We've seen this story before: Republicans stake out a radical position and demand big concessions in return for a deal. It happened on the Bush tax cuts in December, and again on the budget last month.


But this time can be different. Republican leaders all agree that the bill to keep the country from defaulting on its debts must pass. Boehner himself admitted in January that the consequences would be disastrous.3 In other words, he's already admitted that he's bluffing and that he'll eventually agree to pass the bill in question.


But if Democrats don't stand up to Boehner, Republicans could push through a "Medicare kill switch" and get bipartisan cover to do it. Can you call the White House to make sure that doesn't happen?


Tell President Obama to take Medicare cuts off the table, and not to negotiate with Republicans as long as they're holding the economy hostage.


Then, click here to let us know what they said.

–Daniel, Julia, Tate, Tim, and the rest of the team

P.S. To help expose Boehner's threats for what they really are, we put them in the most appropriate format—a ransom note. You can share the note by going to http://front.moveon.org/john-boehners-ransom-note/?id=27315-10220574-WW9EiHx&t=3 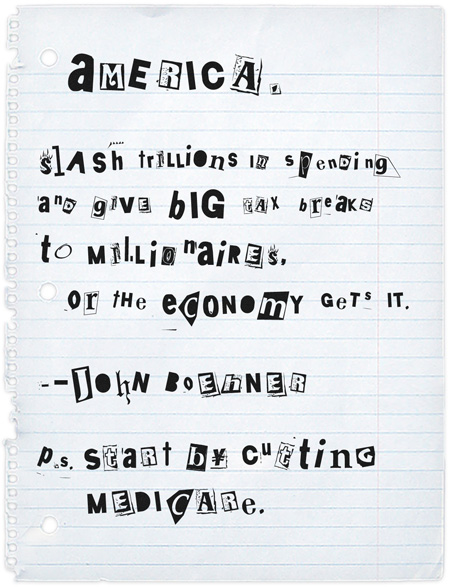 PAID FOR BY MOVEON.ORG POLITICAL ACTION, http://pol.moveon.org/. Not authorized by any candidate or candidate's committee. This email was sent to eddie alfaro on May 11, 2011. To change your email address or update your contact info, click here. To remove yourself from this list, click here.