Don't tread on us

Our efforts to define Mitt Romney as the candidate for the 1% are working. Nearly 6 in 10 Americans think Romney will look out for the rich more than the middle class if he becomes president.1

But Romney just pulled ahead of President Obama in the latest national poll, and he's gaining ground in some key swing states.2 At the Republican Convention in Tampa this week, Romney's going to try to do what all the experts say he has to—make us believe that he actually cares about the middle class, even though all the evidence shows otherwise.

That's why it's so important to remind voters that Romney and Ryan will step on cash-strapped seniors by dismantling Medicare and walk over the struggling middle class with more taxes to pay for steep tax cuts for the rich.3 And we have a video that LITERALLY shows just that.

Watch this short video of Romney and Ryan accepting their nomination for President and Vice President of the 1%. And then share it with all your friends so that they're not fooled. 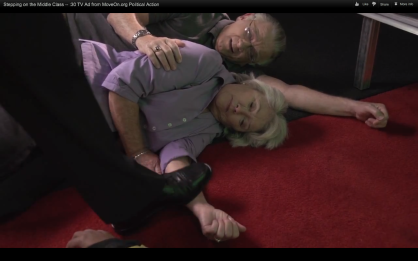 –Lenore, Tate, Emily, Robin, and the rest of the team

P.S. Tune in soon for the hilarious mockumentary about how Mitt Romney survived his hardscrabble childhood 'burbs of Bloomfield Hills to become the man he is today. It's aptly named The Man from Bloomfield Hills, and it's coming out just in time for Romney's acceptance speech!

Want to support our work? We're entirely funded by our 7 million members—no corporate contributions, no big checks from CEOs. And our tiny staff ensures that small contributions go a long way. Chip in here.

PAID FOR BY MOVEON.ORG POLITICAL ACTION, http://pol.moveon.org/. Not authorized by any candidate or candidate's committee. This email was sent to eddie alfaro on August 27, 2012. To change your email address or update your contact info, click here. To remove yourself from this list, click here.