The historic typhoon that hit the Philippines last weekend has left nearly 2,000 people dead—and officials fear that the death toll could rise to 10,000.1

It's unlikely that this is just some crazy fluke of the weather. Scientists overwhelmingly say that climate change is fueling more and more extreme weather events like Super Typhoon Haiyan.2 But world governments, including the United States, seem paralyzed to do anything about it. Maybe that's why an incredible speech is being shared widely on Facebook and other social media sites right now, featuring the Philippines' chief climate negotiator, Naderev "Yeb" Saño.

"We cannot solve climate change when we seek to spew more emissions. I express this with all due sincerity. In solidarity with my countrymen who are struggling to find food back home and with my brother who has not had food for the last 3 days...I will now commence a voluntary fasting for the climate... until a meaningful outcome is in sight."3 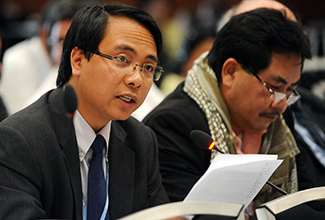 Here are two actions you can take now—to both support people in the Philippines who face a long and difficult recovery, and to push for real action to prevent more devastating superstorms:

1) Sign the petition to support the Philippines' climate chief Yeb as he calls for real action to curb climate change at the UN climate negotiations happening right now in Warsaw. This petition was written by Christina M. Samala, a Filipina American woman and director of the organization 18MillionRising—and we'll make sure the signatures get to Yeb while he's in Warsaw in a way that makes an impact on his mission to win meaningful climate action.

2) Consider making a donation to Oxfam's relief efforts. Oxfam teams are aiming to reach 500,000 people with drinking water, sanitation and shelter, focused on the hardest-hit islands of Samar, Leyte, and Cebu. Oxfam has set up a donation page for MoveOn members, and your donation is tax deductible.

Two weeks ago, MoveOn members marked the one-year anniversary of Hurricane Sandy. Now the people of the Philippines are reeling. We're all in this together, and the best news is that we have each other's backs.

–Anna, Victoria, Maria, Alejandro, and the rest of the team