When President Obama visited Silicon Valley and Los Angeles this week for fundraisers, our protests filled the news coverage from California to Washington—on ABC, NBC, The San Francisco Chronicle, The Hill, and more.

It was awesome. Hundreds of activists with MoveOn.org, Free Press, CREDO, Color of Change, Demand Progress, and other grassroots, Internet-based groups came out to deliver a message to President Obama: fulfill your promise to protect Net Neutrality, and stop the FCC's proposal to turn the Internet into a pay-to-play scheme that favors wealthy corporations.

Have a look for yourself—and then share this short video of the big day with everyone you know, so that pressure mounts on President Obama to speak out to stop the FCC's plan to kill the Internet before it's too late: 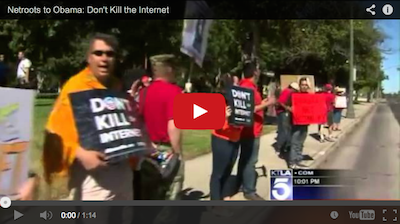 We're being heard. The president's motorcade drove right by us—aides and reporters rolling down windows to get a glimpse of our signs and hear our chants: "Barack Obama, yes you can, stop Tom Wheeler's stupid plan!"

Since his first campaign for president, President Obama has promised to preserve the open Internet that helped him get elected and that every American relies on to access information, start a new business, and compete on a level playing field. But he has yet to address the issue this summer or push for the FCC to preserve true "Net Neutrality" by treating broadband Internet as a public utility.

Now, President Obama is sitting on the sidelines while Tom Wheeler, the FCC chair that he appointed, moves ahead with a plan that would kill the Internet as a level playing field for all.

The president has a choice—allow the FCC to do the bidding of Verizon and Comcast and oversee the death of the open Internet, or use his political megaphone to call for the real solution: treating the Internet as a public utility.

There's still time for the president to call for what's right. And there's time for us to demand that he take that stand.

Can you watch and share this video so that more people know that, yes, President Obama can take a stand to save the Internet?

–Maria, Rosy, Bobby, Victoria, and the rest of the team

PAID FOR BY MOVEON.ORG POLITICAL ACTION, http://pol.moveon.org/. Not authorized by any candidate or candidate's committee. This email was sent to eddie alfaro on July 27, 2014. To change your email address or update your contact info, click here. To remove yourself from this list, click here.