You've got to hear this feminist


But over and over, attacks on women wind up backfiring—and that's no accident. As you can hear in this interview with Nita Chaudhary, co-founder of the group Ultraviolet and former national campaigns and organizing director at MoveOn, it's the result of a rising wave of young feminist leaders fighting to put a political and economic price on sexism.


If you want to know how to win the war on women, you've got to hear this podcast. 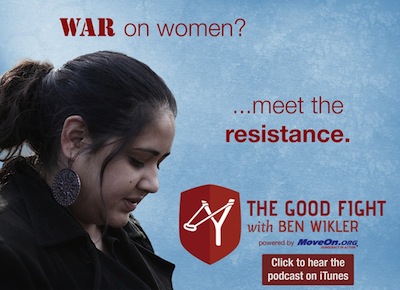 Within days of Ultraviolet's launch in 2012, Nita and her team were taking on the likes of John Boehner and Rush Limbaugh, using cutting-edge rapid-response campaign tactics that sent their opponents reeling.


Today, Ultraviolet is a grassroots force with hundreds of thousands of members, shining a powerful light on anti-woman politicians, sexism in pop culture and the media, and rape on campus. On this episode of "The Good Fight," you'll get to hear how it all came together—and what's next.


The technology might be different, but feminism in 2014 comes from the same place it always has: the radical notion that women are people. Now, thanks to Nita and her allies, that idea's got an army behind it.


P.S. Don't use iTunes? No problem. You can listen to the podcast on the Web, tune in via Stitcher (an Android and iOS app), or subscribe via RSS. And if you do use iTunes and you like the show, be sure to subscribe on iTunes .... and post a review!

PAID FOR BY MOVEON.ORG POLITICAL ACTION, http://pol.moveon.org/. Not authorized by any candidate or candidate's committee. This email was sent to eddie alfaro on July 14, 2014. To change your email address or update your contact info, click here. To remove yourself from this list, click here.