Card for Charleston: add your name

Sign the card being delivered, along with flowers, to the families of the victims from Mother Emanuel church.

In the last week, we've seen incredible progress in removing one of the most potent symbols of racism in America—the Confederate flag. And we've also celebrated huge wins at the Supreme Court, including this morning's decision on marriage equality.

Today is a day of mixed emotions, however, because as the nation lays to rest a public servant and a man of the cloth—South Carolina State Senator Rev. Clementa Pinckney—we return to mourning, to honor the victims of an unforgettable tragedy.

Nine precious lives were stolen last Wednesday night by a coward and a murderer. Those were the lives of Rev. Sharonda Coleman-Singleton, Cynthia Hurd, Tywanza Sanders, Myra Thompson, Ethel Lee Lance, Rev. Daniel Simmons Sr., Rev. DePayne Middleton-Doctor, Susie Jackson, and Rev. Clementa Pinckney. As the families of these victims mourn and lay their loved ones to rest, we want to remind them that the nation mourns with them.

Our friends at ColorofChange.org are delivering flowers to the families along with a card that reads, "Charleston: Brokenhearted, we stand with you." Will you add your name to the card today? 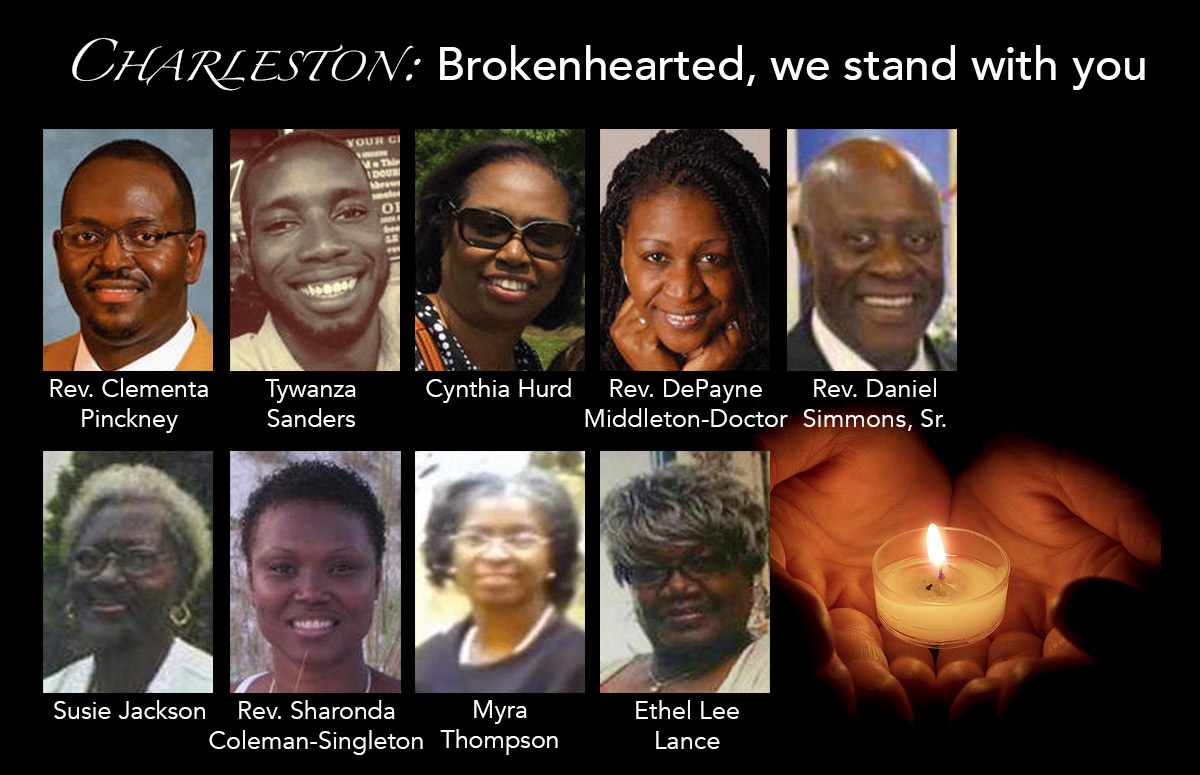 Emanuel AME Church truly exemplifies the word historic. The church was founded in 1816 as one of three Methodist Episcopal churches under the Free African Society. In 1822, it was destroyed, burned to the ground, when white South Carolinians were informed of a slave revolt being planned by one of its founders—Denmark Vesey.

The congregation rebuilt and practiced openly until 1834, when all Black churches were outlawed. Forced underground, they continued the tradition of the African church until reorganizing in 1865, and taking the name Emanuel. A church on the current site was destroyed in an earthquake in 1886, but rebuilt again by 1891. The congregation occupies that same 125-year-old building today.

Now again, Mother Emanuel, as it's known, bears witness to tragedy. And now—again—Mother Emanuel's faithful people rebuild. This week, Bible study resumed at the church, as congregants refused to surrender their house of worship to anger, fear, or anything short of prayer and love.

President Obama eulogized Rev. Pinckney today as his funeral service was held in Charleston. On days like this we all stand united, politics aside, embracing this heartbreaking moment as an opportunity to move our nation forward, together.

Please add your name today to our card reminding those families mourning in Charleston that, brokenhearted, we stand with them.

–Corinne, Mark, Matt, Maria, and the rest of the team