You + Elizabeth Warren + me this Wednesday

Will you sign up for this call with Sen. Warren on Wednesday evening? Don't miss out on Sen. Warren explaining how progressives can work together to win the key fights ahead and keep shaping the Democratic Party.

Though she's not in the race, with the help of efforts like the Run Warren Run campaign, Sen. Warren's fight against economic inequality has helped drive the presidential debate and move the issue to the forefront of the national political conversation—alongside other key progressive priorities, like pursuing diplomacy over war, getting money out of politics, addressing climate change, answering the call of the growing Movement for Black Lives, acting on the need for immigration reform, and more.

That's why we're excited to have Sen. Warren join us for our first joint effort since the suspension of the Run Warren Run campaign to discuss how progressives can fight together on important issues in the months ahead—including tackling our student debt crisis and defeating Fast Track for the job-killing Trans-Pacific Partnership.

Will you join Senator Elizabeth Warren, me, other MoveOn members, and Democracy for America members on Wednesday evening? 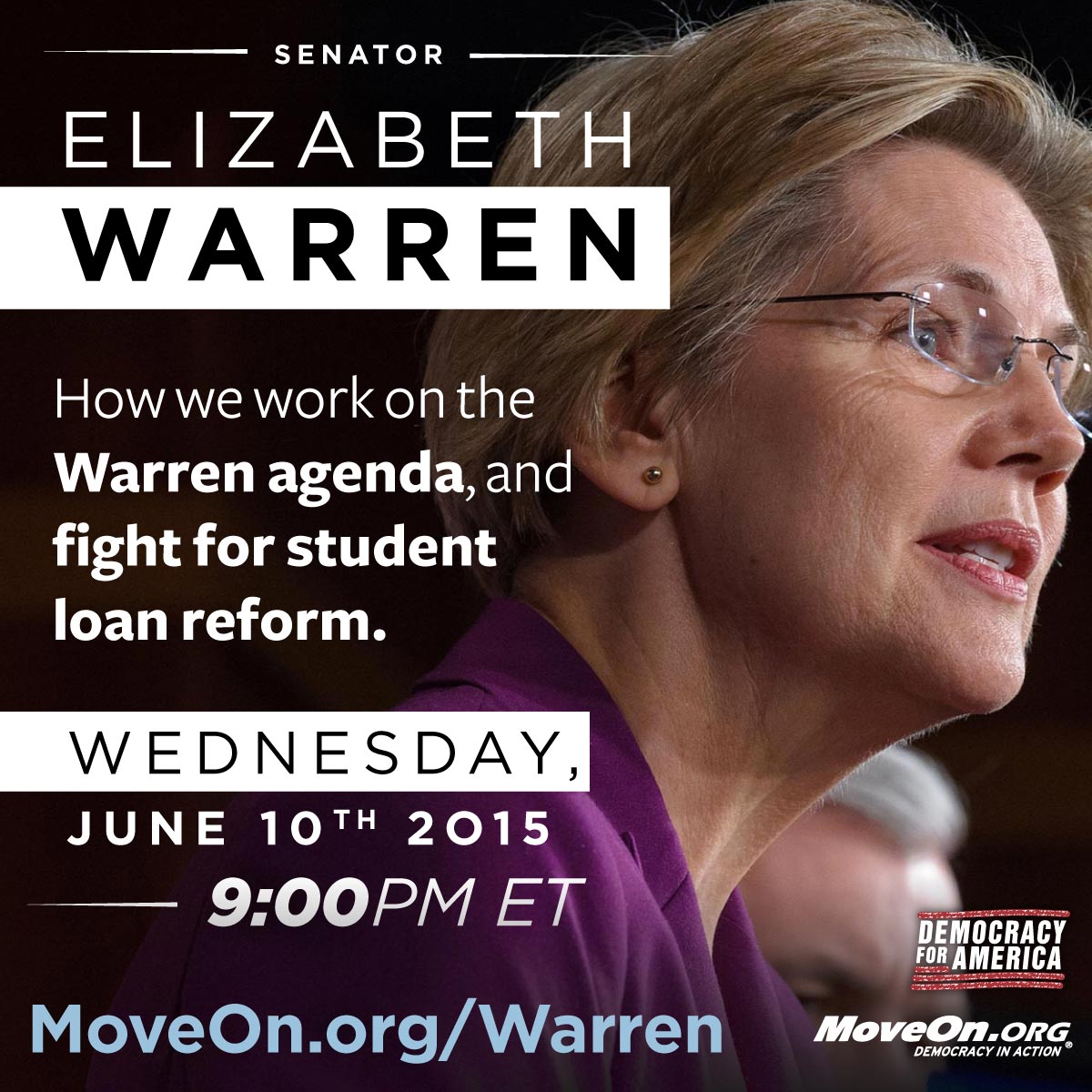 MoveOn members have stood alongside Sen. Warren time and time again as she's fought for the middle class—from organizing for her proposal to charge student loan borrowers the same low interest rates that banks receive, to backing her successful effort to create a strong and independent Consumer Financial Protection Bureau, to amplifying her call for expanded Social Security benefits.

When Sen. Warren ran for the Senate in 2012, MoveOn.org Political Action bundled more than $1 million in small contributions to her campaign, and nearly a thousand Massachusetts MoveOn members turned out to volunteer for her.

Suspending the campaign to draft Sen. Warren into the presidential race is the right call at this moment. It'll allow both MoveOn and our partners at Democracy For America to shift our focus to fighting alongside Sen. Warren on key issues and advancing an agenda that puts working and middle-class Americans over corporate interests.

Wednesday's call at 9 p.m. ET is our next big step in this new direction. We hope you'll sign up to join us.

–Anna, Milan, Nick, Jo, and the rest of the team

PAID FOR BY MOVEON.ORG POLITICAL ACTION, http://pol.moveon.org/. Not authorized by any candidate or candidate's committee. This email was sent to eddie alfaro on June 8, 2015. To change your email address or update your contact info, click here. To remove yourself from this list, click here.