The SchumerMobile hits New York City streets today.1 Pictured below, it began its journey just in front of Senator Charles Schumer's Manhattan office, as one hundred MoveOn members chanted "No war with Iran" and called on Congress to support the Iran nuclear deal.

The SchumerMobile is a MoveOn member-funded, weeklong public rebuke of Sen. Schumer's opposition to the Iran deal in the form of a mobile billboard that will crisscross Manhattan, Brooklyn, Queens, and the Bronx.2

The billboard text suggests that Sen. Schumer's actions to undermine the historic diplomatic agreement with Iran have won him the ignominious title of "Most Likely to Start a War." The text also serves as a reminder of the stark consequences we'll face if New York's Democratic lawmakers join with congressional Republicans to wreck the Iran nuclear deal.

To make certain all New York MoveOn members have an opportunity to hold Sen. Schumer accountable and send a powerful message to yet-undecided Democrats, we've created a "yearbook" page for Sen. Schumer.

Will you add your name to our "yearbook" message for Sen. Schumer right now? 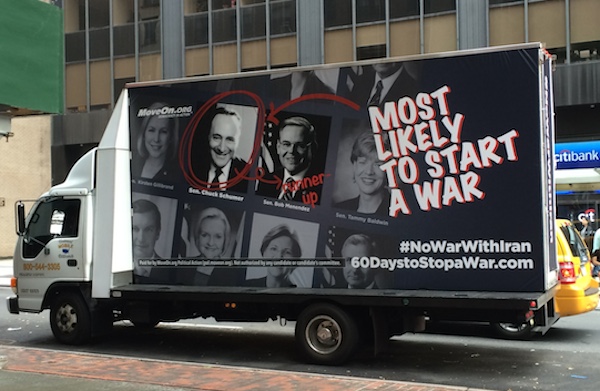 As one of only two Senate Democrats opposed to the Iran nuclear deal to date, Sen. Schumer is standing with Donald Trump, Dick Cheney, and Republicans in Congress—and against President Obama and the strong majority of Democrats in the Senate. (Let's not forget that Sen. Schumer wants to be the next leader of Senate Democrats.)

By signing Sen. Schumer's "yearbook," you're not only sending the senior Senator from New York a powerful message, you're letting all yet-undecided Democrats see a bit of what they can expect from MoveOn members should they choose war over diplomacy.

Will you take a moment now to note your support for Iran diplomacy?

This latest rebuke of Sen. Schumer's anti-diplomacy stance is an extension of the efforts of more than 180,000 MoveOn members who have pledged to withhold approximately $43 million in political campaign contributions from Sen. Schumer and individual Democrats (and the party committees that support them) if they succeed in sabotaging diplomacy.

MoveOn members remain passionate defenders of this breakthrough agreement for peace and security—taking to the streets in hundreds of actions during the August recess. We're in the home stretch of this work and every petition signature matters as Congress prepares to return to Washington, D.C. and vote on the deal.

Let's help ensure that the SchumerMobile drives Sen. Schumer back to Washington, D.C. with an unmistakable mandate from New York constituents—so clear that it serves as a cautionary tale to anyone considering joining the Senator by opposing diplomacy.

PAID FOR BY MOVEON.ORG POLITICAL ACTION, http://pol.moveon.org/. Not authorized by any candidate or candidate's committee. This email was sent to eddie alfaro on August 31, 2015. To change your email address or update your contact info, click here. To remove yourself from this list, click here.