Yesterday, we took a huge step to defend our democracy and secure voting rights.

When the Supreme Court struck down a key provision of the original Voting Rights Act of 1965 last summer, it stripped away voter protections that have helped thousands cast their vote—and left it to Congress to clean up the mess. And for eight months now, Congress has failed to act.

This is what it looks like when we start to take action ourselves—when we stand with Democrats who have spent years fighting for voting rights and demand that Republicans join them. Yesterday, more than 4,000 MoveOn members visited representatives' local offices asking for their support of the Voting Rights Amendment Act of 2014, which would provide federal protection from discriminatory voting practices. 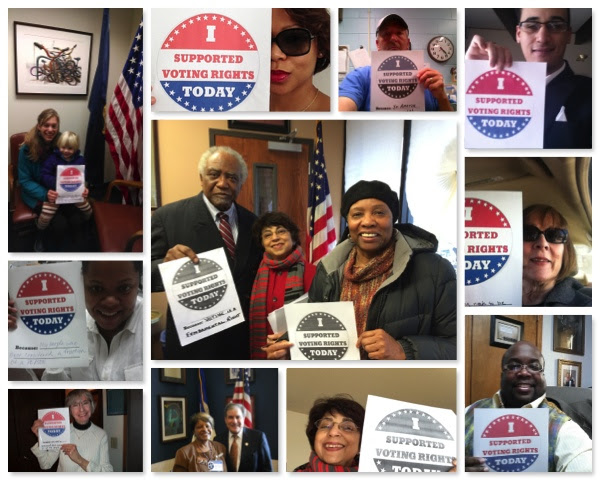 For the past month, we've built grassroots energy to push Congress to strengthen and pass the bipartisan Voting Rights Amendment Act of 2014. Here's what MoveOn members have accomplished so far:

Congress is listening. We've fielded dozens of calls from Congressional offices wanting us to know they've heard the message—but that we can't stop now.

To win against the inertia of Washington, we have to keep pushing, especially in Republican-held districts, until this critical bill gets through committee and to a vote.

If we lose, we face a 2014 election without federal voter protections. Think ridiculously long lines. Polling locations that change without public notice. Reduced early voting days. And a host of voting changes that could push people of color, the poor, the young, and the elderly out of the polls.

The Voting Rights Amendment Act of 2014 isn't a magic wand that will prevent every voting abuse, but it is a strong step in the right direction. Getting bipartisan support is key to passing this bill and laying the groundwork for strengthening voting rights across the nation.

Because MoveOn members know that our right to vote is at the core of all the issues we care about—education, health care, a strong economy, and so much more—you have stepped up in a big way. Hundreds of you reported meeting and talking with staffers yesterday and hearing firsthand how our elected officials are working (sometimes behind the scenes) to support voting rights.

"I talked with my congressman's staffer. I told him my personal experience of the difficulty I had helping my neighbor get an ID card several years ago. She was elderly, and the only documents she had which they would accept had her first name spelled differently. It took months to get her name changed on her birth certificate to match her Social Security number.—Jean E., Chapel Hill, North Carolina

"I was glad I did this, a small act of democracy that made me feel good. I feel strongly about access to voting that is fair to all."—Joanne S., Keizer, Oregon

"A staffer greeted me at the door and I told him I was there to show support for the Voting Rights Amendment Act. He informed me that several other MoveOn members had been in earlier in the day. He also said that my congressman would support the bill."—Terry B., Lovejoy, Georgia

Congress has a real opportunity to pass bipartisan legislation to restore the Voting Rights Act, but it's going to take an outpouring of grassroots energy to make that happen.

That's why we're not done yet. With thousands of MoveOn members organizing in hundreds of districts, we're now positioned to keep up the pressure until the Voting Rights Amendment Act is brought to a vote.

Can you support our voting rights work between now and election day?  Click here to chip in.

–Milan, Heidi, Jessica, Justin, and the rest of the team


Want to support our work? MoveOn Civic Action is entirely funded by our 8 million members—no corporate contributions, no big checks from CEOs. And our tiny staff ensures that small contributions go a long way. Chip in here.