Temporary victory for diplomacy with Iran

More than seventy-four thousand MoveOn members have already signed Sen. Chris Murphy's petition calling on the Senate not to undermine President Obama's diplomacy with Iran. Below is an important follow up message from Senator Murphy about this campaign. Take a look:
Dear MoveOn member,

Thank you for joining me in calling on the U.S. Senate to give diplomacy with Iran an opportunity to succeed before voting on any additional sanctions.

In large part because of people like you making your voice heard, I am confident that the Senate won't vote to approve new sanctions while negotiations are with Iran are ongoing. And while momentum is on our side, there are still calls from within the Senate, especially among Senate Republicans, to vote on a sanctions bill now.

That means we have to push as well.

Right now, the most important thing we can do is have people continue to contact their Senators. Can I count on you to spread the news about our petition via email, Facebook, or Twitter? 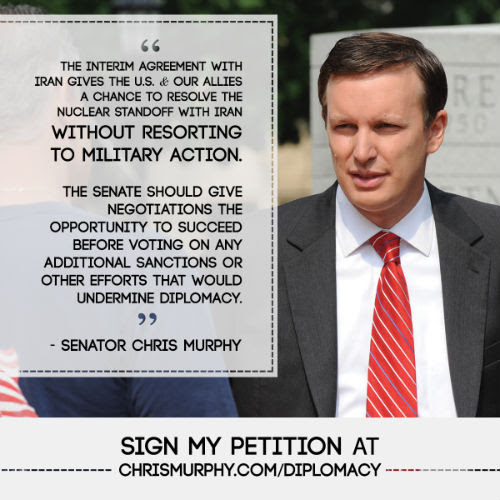 In 2006, I was elected to Congress as a vocal opponent of the Iraq War, and I spent my years in the House working to ensure we never forget that war's true cost to our nation.

Eight years later, now as a U.S. Senator, I'm proud to stand with President Obama as he fulfills a campaign pledge to directly engage Iran in a diplomatic effort to halt their nuclear ambitions.

I'll continue to keep you up to date as these efforts move forward.

PAID FOR BY MOVEON.ORG POLITICAL ACTION, http://pol.moveon.org/. Not authorized by any candidate or candidate's committee. This email was sent to eddie alfaro on February 19, 2014. To change your email address or update your contact info, click here. To remove yourself from this list, click here.