We just finished compiling some of the best moments from our live showcases into a short (and not suitable for work) video. Some of the jokes are edgy, profane, and potentially offensive, as humor can be. But this is humor in service of an important goal: upending Trump and his allies, and calling out their sexism, racism, and homophobia. Don't start watching in front of your boss or your toddler—but DO start watching in front of a swing voter (or your conservative uncle, if you're ready to start a lively family conversation)! 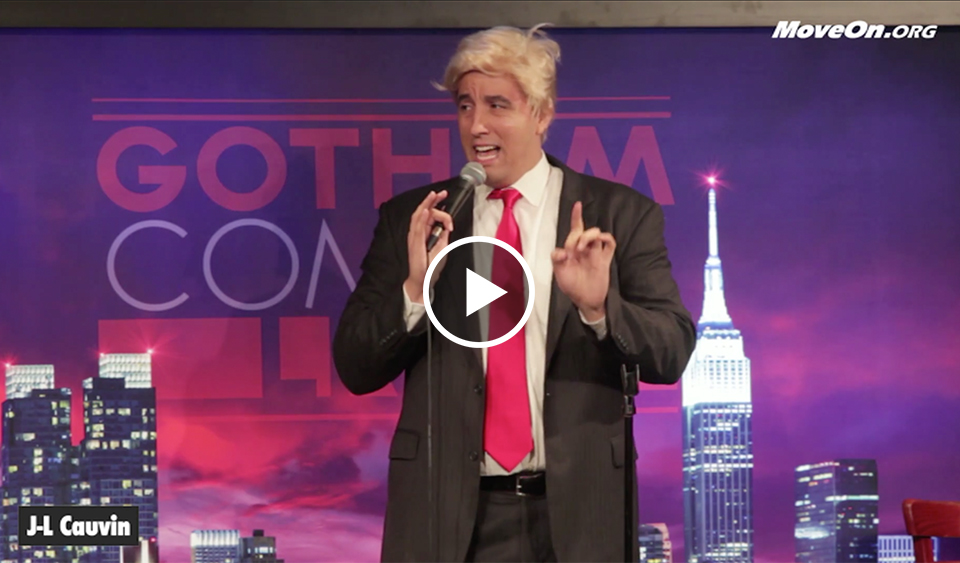 Between now and Election Day, we'll be posting more videos featuring comedians from across the country offering social commentary, satire, and humorous critiques of the right wing.

And today, along with releasing the highlights video above, we're announcing the winners of the Laughter Trumps Hate contest, selected from among more than 200 entries by an all-star judging panel including folks like Judd Apatow, Adam McKay, Aasif Mandvi, Negin Farsad, among others.

And based on the votes of thousands of MoveOn members:

Check out the videos (again, they're NOT suitable for work) of the winners, finalists, and comics from across the country now.

Donald Trump is terrifying, authoritarian, and a real threat to our democracy. We take the threat posed by Trump seriously. We're running a massive voter contact program, circulating breakthrough online videos about the stakes of this election, and organizing public opposition to his hateful politics. And we're also using humor—because we need to try everything to put this bully on the ropes and help Hillary Clinton win this election.

Enjoy the videos now—then share your favorites with friends and family.

P.S. Did you catch this weekend's story in The New York Times? Never-before-seen Trump tax records show that Donald Trump may have paid nothing in federal income taxes for nearly two decades.1

This story of Trump the billionaire skipping out on his fair share has the potential to break through with the unusually high number of voters who are still on the fence. As The Washington Post reported, undecided voters in a focus group in North Carolina "gasped" when Trump said, in the first debate, that not paying taxes would make him "smart."2

MoveOn's video with Senator Elizabeth Warren asking what Trump is hiding by refusing to release his tax returns has already become a viral mega-hit, with over 26 million views.

We're rushing to buy up ad space in battleground states and make sure undecided voters hear that Trump is a likely tax dodger. But ad space is quickly dwindling. Can you chip in now to help ensure voters in swing states learn the truth about Trump's shoddy business practices and likely tax dodging?