Can you join a live phone call with Senator Warren to hear her take on the state of the race, learn the most important ways you can join MoveOn's voter turnout efforts—and kick off the final sprint to Election Day? 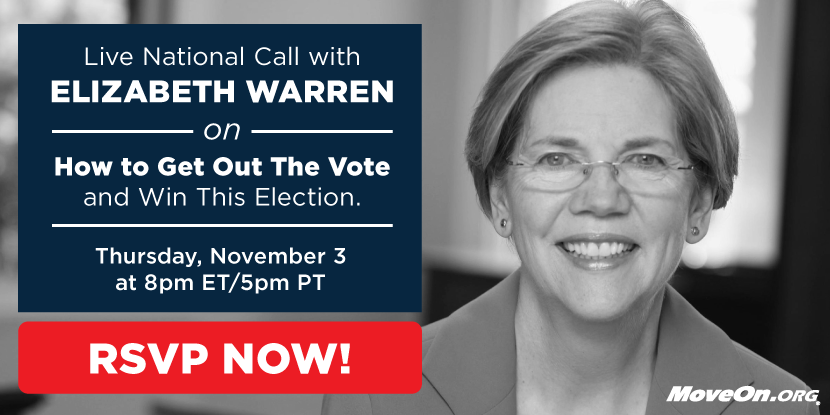 The stakes couldn't be higher this election. And Senator Warren, who's been criss-crossing the country to defeat Trump and win back the Senate, knows as well as anyone exactly what we have to do to make history on November 8. There's no better way to get an infusion of get-out-the-vote energy than hearing from Elizabeth Warren directly.

Can you join Thursday's call at 8 p.m. Eastern / 7 p.m. Central / 6 p.m. Mountain / 5 p.m. Pacific Time? RSVP here and we'll dial your number automatically to loop you in as the call begins:

I can join the call with Senator Warren this Thursday!

This election could be an incredible opportunity to move a progressive agenda forward, but as the sudden shift in polls reminds us, nothing is certain and we can't be complacent. There's just one question now: Will we show up?

Here's the heart of our final-sprint plan:

On top of that, we'll be fighting to protect the integrity of the democratic process, with a rapid-response election protection team; sharing unforgettable videos and ads, like our new PSA with artist Alicia Keys; and even helping MoveOn members talk to their undecided friends via social media using our buzzed-about "SwingVoterGO" election game.

What a road we've traveled to get here! Just under two years ago, MoveOn launched its campaign to draft Elizabeth Warren for president. Early this year, MoveOn members voted to endorse Bernie Sanders. And by the convention this summer, Hillary Clinton—our nominee—had made many of Warren's and Sanders' ideas the centerpiece of her platform.

Today, Warren, Sanders, and MoveOn members are all fighting shoulder to shoulder with Clinton to stop Trump and make that platform a reality.

All in all, it's MoveOn's biggest effort in a decade. But it works only if members like you join the fight in this critical final stretch. That's why this call with Elizabeth Warren is so crucial—to lay out the battle plan and send us to the front lines.

Can you join this Thursday's call with Elizabeth Warren?

This election will be written about for decades to come. If we do our jobs between now and the evening of November 8, it will go down as a moment when the good sense, civility, and shared values of a majority of Americans led to the rejection of racism, misogyny, Islamophobia, xenophobia, hatred, and authoritarianism—by a presidential candidate and his enablers.

That story is important. It will help define who we are as a nation. But it will come true only if we make it true. Now's the time.

Thanks for all you do,

–Ilya, Anna, Victoria, Matt, and the rest of the team

Want to support MoveOn's work? Senator Elizabeth Warren says, "I'm so enthusiastic about MoveOn's smart and targeted plan to hire a network of organizers in key battleground states to mobilize and train volunteers to knock on hundreds of thousands of doors. It's bold and ambitious—and exactly what is needed to help swing Senate races, resoundingly defeat Donald Trump, give Democrats a fighting chance to take back the House, and build the power we need to win progressive change after the election." Will you chip in to help make it all possible?