We can stop the Muslim ban.

On Friday, Donald Trump tried to block Muslims and refugees from coming to this country. On Saturday, America fought back. And it's massive.

Thousands gathered at JFK airport in New York, demanding the release of refugees and others detained after Trump's orders. They sang, they chanted, they showed up with love and with might. Have a look at the Facebook Live stream from our friends at Working Families Party—it was a sight to behold: 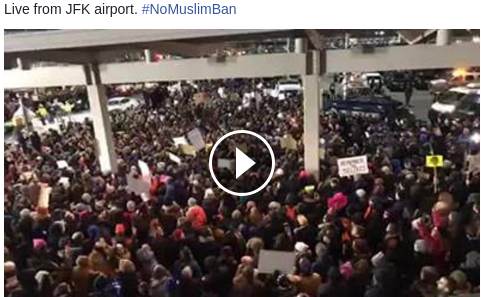 Then, just hours ago, a federal judge in New York issued a stay on Trump's ban for refugees and visa holders currently stranded at airports.1 That's a huge first step, but it doesn't yet undo the ban. Meanwhile, what started in New York is spreading.

Thousands have gathered at airports in Boston, in San Francisco, in Denver, and in upwards of 34 other cities demanding that America uphold our core values, welcome refugees, and say "no" to any religious test on immigration to this country. Many protests are happening right now. Some will continue throughout the weekend, or even longer.

Check out this volunteer-generated, fast-growing list of airports and community spaces where protests and vigils are happening.

People who've shared stories about the airport protests today have reported big, diverse, and peaceful crowds. In some airports, groups of lawyers have been among the crowd—waiting to speak to refugees and visa holders who've been denied access to counsel. Members of Congress from Representative John Lewis to Senator Elizabeth Warren, local city officials, and other prominent leaders have joined the airport protests in many cities.

If you can join a peaceful protest in your area, you'll help show the Trump Administration, the country, and the world that Americans will resist hate and will resist Islamophobia and will instead unite in the face of injustice.

Some of the protest organizers will have signs to share, but some may not—so feel free to make a sign to hold, or you can print one of MoveOn's signs to bring with you. Just click here.

Some protests are growing so large that vendors at the airports are running out of food and water, so if you're able to join, consider bringing supplies such as bottled water, granola bars, and other nonperishable snacks to share.

These are anguishing times, but the love and the energy on display at airports across the country are our best hope for preserving our American values. Because this is what resistance looks like. We're not done marching.

—Milan, Jo, Iram, Anna, and the rest of the team

Contributions to MoveOn.org Civic Action are not tax deductible as charitable contributions for federal income tax purposes. This email was sent to Eddie Alfaro on January 29th, 2017. To change your email address or update your contact info, click here. To remove yourself from this list, click here.