While members of Congress take unprecedented sums of money from the oil and gas industry and cast votes to loosen regulations on fracking,1 at the local level we are winning fight after fight.

Right in the heart of Texas oil and gas country, the Dallas City Council just voted 9-6 to essentially ban fracking—the practice of injecting toxic chemicals and massive amounts of water deep underground to reach oil and natural gas deposits—within that city of more than a million people.

A day later, Erie County, New York—home to Buffalo—banned fracking on county lands with a 9-2 vote of the county legislature. More than 500 local MoveOn members took part in that campaign.

And last month, voters in four Colorado towns approved permanent or temporary bans on hydraulic fracturing—despite being outspent 32 to 1 by Big Oil and Big Gas.2

The anti-fracking movement has figured out how to win—using grassroots organizing and people power to beat back big industry in town after town and county after county—and now it's time to double down on our strategy. That's why we launched the #FrackingFighter project to recruit and support grassroots leaders who are running effective local campaigns to fight fracking in their own communities—just like MoveOn members did in Dallas, Buffalo, and Colorado.

Meet the 100 MoveOn Fracking Fighters from 37 states—local activists who will receive materials, grant money, and training for their campaign—and then share the page on Facebook and Twitter using hashtag #FrackingFighter to show the fossil fuel industry and elected officials that our movement is growing. 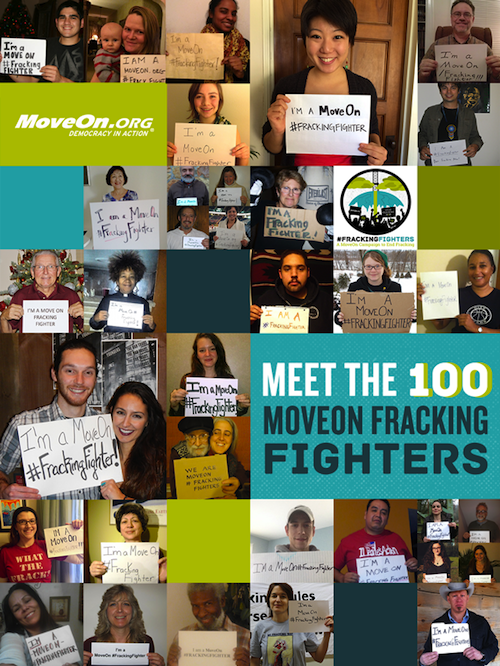 Selecting 100 winners after more than 1,000 MoveOn members applied—when we were expecting just 200 applications—was a nearly impossible task. A review committee of author and ecologist Sandra Steingraber, Native American environmental leader Kandi Mossett, and MoveOn.org Civic Action Executive Director Anna Galland made sure we supported leaders from all walks of life.

Because so many amazing leaders stepped forward to apply, we're able to make additional resources available to everyone who applied—in addition to the MoveOn toolset and community that anyone can use to create progressive change, any day of the week.

Meet some of the MoveOn Fracking Fighters we're able to support thanks to the donations of MoveOn members like you:

Dallas, Erie, and Colorado are proving that if we invest in local organizing, we win. And that's what we're doing.

–Victoria, Manny, Matt B., Rosy, and the rest of the team

P.S. Right now, we're $356,244.97 short of where we need to be by December 31 in order to be in a strong position heading into a big election year. Will you chip in to keep MoveOn healthy and ready to fight fracking heading into 2014?