Last night Senator Patty Murray and Representative Paul Ryan released their budget agreement to avert another government shutdown. To be honest, parts of the bill are really painful.

The deal allows unemployment insurance to expire for 1.3 million people at the height of the holiday season and attacks the pensions of federal employees.1 It provides some sequester relief but does so on the backs of government workers. And one of the only good things about the entire deal is that something is conspicuously absent: any attempt to cut or curb Social Security benefits.

That's right. In just a few short months, thanks to the leadership of MoveOn members and allies, we've completely changed the conversation on Social Security. Cuts are off the table, and now the idea of expanding benefits—a common-sense solution that was already popular with Americans across the country—is starting to take hold in Washington too. And in a year that started with our own Democratic president proposing cuts to Social Security, we couldn't have asked for a better ending.

That's why we're doubling down on our campaign to increase benefits, beginning today, with the release of our new ad explaining why current benefit levels just aren't enough.

Can you watch our new ad and share it with your friends and family today? 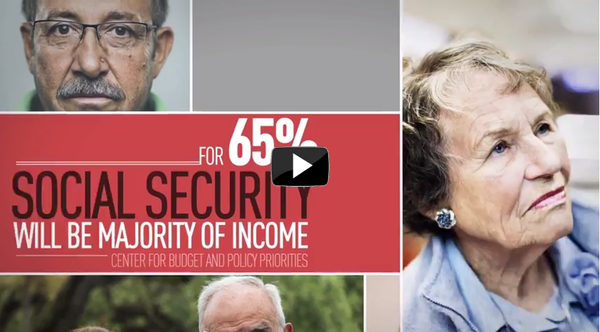 If you're wondering whether this will really be an important issue in 2014, look no further than the past two weeks. Senator Elizabeth Warren came out strongly in support of expanding benefits and was promptly attacked by a "left-leaning" Wall Street front group that claimed she was leading the Democratic Party astray.

We've got to lean in now to make sure Social Security benefit cuts don't creep back into the Beltway conversation the way so many bad ideas often do. If we make this the central issue of 2014, we've got a chance make the most popular, successful program in U.S. history even better.

–Mark, Bobby, Alex, Mariana, and the rest of the team

PAID FOR BY MOVEON.ORG POLITICAL ACTION, http://pol.moveon.org/. Not authorized by any candidate or candidate's committee. This email was sent to eddie alfaro on December 11, 2013. To change your email address or update your contact info, click here. To remove yourself from this list, click here.