Reportback: Save the Internet! Day of Action

Together, we did something unprecedented. Last Thursday, May 15, within minutes of a vote in Washington, D.C. that set the stage for a showdown over the future of the Internet, MoveOn members like you were in the streets, gathering at rarely-visited, remote FCC offices in 19 cities along with headquarters in Washington, D.C.

There's been coverage in tons of national media outlets—and the work of MoveOn members helped get this issue into regional news outlets as well (like The Seattle Times, the San Jose Mercury News, and the St. Louis Post-Dispatch)—making clear that the FCC, which normally operates with a low profile, is now in the public spotlight, and that the decisions made in Washington, D.C. are decisions that affect our lives.

Rep. Jerry Nadler joined the crowd of more than 80 people in New York City—including allies from CREDO, Fight for the Future, and Free Press—chanting "Hey hey FCC! Keep the Internet open and free!": 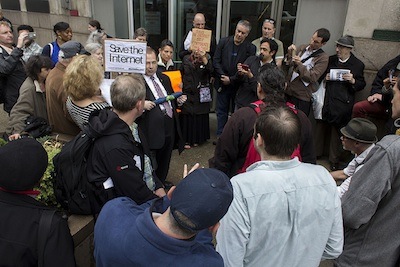 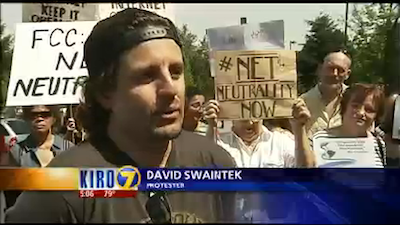 And in Los Angeles, 11-year-old Michael gave a rousing speech aimed at Tom Wheeler, FCC chairman. Click here to watch the video (made by fellow MoveOn member Lauren Steiner) and share this blog post with everyone you know: 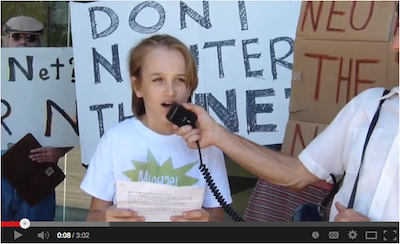 If FCC Chairman Tom Wheeler thought he could sneak through his 'fast-lane' plan—a massive handout to Verizon and Comcast—he was dead wrong. We've helped to unleash a massive public backlash that's thrown his plans into disarray.

The proposal that the FCC advanced last Thursday includes the bad plan—turning the Internet into a pay-for-play scheme—but it also includes a good idea, thanks to effective and principled organizing by many allies in the movement. The good plan, the solution—which is on the table and which we need to fight for—is to treat the Internet like other public utilities, like water, electricity, and telephone services.

We have four months to flood the FCC with comments, to move President Obama to call on his appointee Tom Wheeler to treat the Internet as a public utility, and to get members of Congress on board. We're just getting started and we can do this.

Can you help spread the word and bring more people into our movement by sharing this blog post with everyone you know? If you've got an idea for what you'd like to do next in this campaign, share it in the comments section of the blog!

And, if you can, click here to chip in $3 to support our work fighting for a free and open Internet.

–Maria, Victoria, Kate, Kyle, and the rest of the team

PAID FOR BY MOVEON.ORG POLITICAL ACTION, http://pol.moveon.org/. Not authorized by any candidate or candidate's committee. This email was sent to eddie alfaro on May 24, 2014. To change your email address or update your contact info, click here. To remove yourself from this list, click here.