TODAY: Save the Internet

Today, the Federal Communications Commission will vote on a proposal that could put the Internet as we know it at risk. The FCC could allow big corporations like Verizon and Comcast to charge big websites for an Internet fast lane, putting the rest of us in the slow lane and tearing the Internet apart in a way that might make it difficult to put it back together again.

This is serious enough that thousands of people are taking unprecedented actions across the country today to show the FCC what happens when they threaten the free and open Internet. MoveOn members are showing up at FCC offices in 20 cities, and we're joining allies at a major rally in Washington, D.C., where brave activists have been camped outside the FCC for more than a week.

Will you join this massive day of action to save the Internet by sharing this post on social media right now? 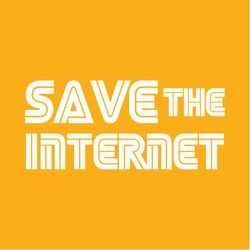 (Not into Facebook? Go here for other online actions you can take)

If everyone who gets this email shares this image, it will be seen by tens of millions of people. The Internet will be a giant sea of orange, and it will be impossible for the media and the FCC to ignore us.

We've already made a huge mark. We've submitted 10,000 MoveOn members' stories and have made more than 2,000 calls to the White House, Congress, and the FCC, helping to shut their phone lines down. This, combined with the efforts of our allies, has thrown the FCC's plans into "chaos," according to Time magazine.1

And it's working. FCC Chairman Tom Wheeler is considering reclassifying the Internet as a "common carrier," which is the best way to protect the free and open Internet.

That's why we can't let up. Verizon, Comcast, and other telecommunications giants know how to get their way with the FCC. The only way to fight back is with a massive public outcry. Today, all eyes will be on the FCC, and thousands of people will be taking action on the ground. Online action from you in support of a free and open Internet will make us impossible to ignore. Will you share this image on Facebook to show the FCC where you stand?

No, but I will take another online action.

–Maria, Victoria, Corinne, Kyle, and the rest of the team

P.S. MoveOn members are showing up at noon today at FCC offices in 20 cities around the country to send shockwaves through the FCC bureaucracy. Will you check to see if you can attend an event near you?

PAID FOR BY MOVEON.ORG POLITICAL ACTION, http://pol.moveon.org/. Not authorized by any candidate or candidate's committee. This email was sent to eddie alfaro on May 15, 2014. To change your email address or update your contact info, click here. To remove yourself from this list, click here.