You need to watch this speech. It's electrifying. It's historic.
Dear MoveOn member,

You've got to see what Elizabeth Warren said to Citigroup executives. It's electrifying. It's historic.

And it could put Elizabeth Warren "into serious contention to be the next President of the United States."1

Ready? Then turn up your speakers and watch the whole thing. 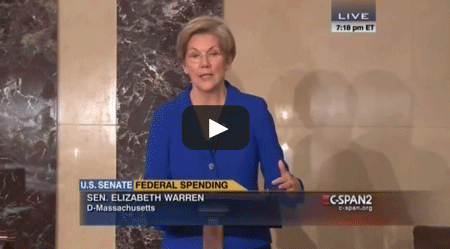 When big banks wrecked our economy, they went to Congress for a half-a-trillion-dollar bailout. Now—six years later—Citigroup thought they could quietly sneak a provision into a must-pass spending bill to let them gamble with taxpayer money again. But Senator Warren fought back hard, and is winning in the court of public opinion.

Barack Obama's 2004 Democratic Convention speech launched him into the running for president. This could do the same for Elizabeth Warren.

Please watch the video right now. And then chip in to help MoveOn as we support Elizabeth Warren's work in the Senate and encourage her to run for president.

–Mark, Robert, Kristin, Ilya, and the rest of the team

PAID FOR BY MOVEON.ORG POLITICAL ACTION, http://pol.moveon.org/. Not authorized by any candidate or candidate's committee. This email was sent to eddie alfaro on December 15, 2014. To change your email address or update your contact info, click here. To remove yourself from this list, click here.