In response to a reporter's question about "the folks that your message is resonating with, that want you to run for president, that support you as a senator," Elizabeth Warren recently said:

Americans understand that the game is rigged, and they've had enough of it. They're ready to fight back. They want a Washington that works for them.

I think that people are getting more engaged, politically, and they're seeing through a lot of the rhetoric that politicians have been throwing out there for a long time. They want to see some real change, and I think that's what we need to work on.1

The hundreds of house meetings and rallies, the more than 300,000 petition signatures, the thousands of media stories—what gets to the heart of all of this tremendous organizing is that Elizabeth Warren herself hears us. She does.

Can you help keep this tidal wave of support going by chipping in $3?

While Sen. Warren was meeting with constituents last week, Massachusetts resident and MoveOn member Bram Haver handed her the signatures of 9,030 of her Massachusetts constituents encouraging her to run for president (Bram is on the left): 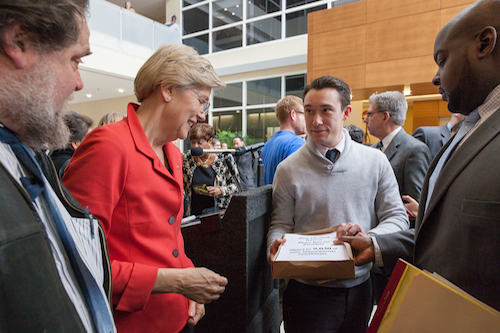 Bram shared with Elizabeth Warren his story about saving money for his three kids' college funds only to have them lose one-third of their value during the economic crisis in 2007. He told her:

When we bailed out Citigroup and Goldman Sachs, we stuck my kids—along with millions of others—with the bill. Each of my kids will now graduate with $30,000-$50,000 in debt. I read up on how to save the right way, and followed the rules, and then the bottom fell out. I felt ashamed, even though I knew it wasn't my fault. It's wrong that we're burdening our kids with historic debt while we bail out the banks that got us into this mess.


With just 36 hours' notice, Bram was able to organize fellow MoveOn members in Massachusetts to greet Senator Warren and show her why they hope she'll run for president.

The truth is, this kind of grassroots mobilization takes resources—the technology to invite nearby supporters on a moment's notice, the ability to print those stacks of petition signatures (and to gather the signatures in the first place), and the funds to hire local photographers like the one who snapped this great photo of Bram with Elizabeth Warren that helps tell the story.

It's all worth it when we learn that what we're doing together is reaching Senator Warren.

Can you chip in $3 to help out so that we're ready for the next opportunity to greet Elizabeth Warren with love and support?

This week, when Senator Warren launched her "Middle Class Prosperity Project" with Representative Elijah Cummings and top economists like Joseph Stiglitz2, Run Warren Run supporters were there to cheer her on again.

Our work is adding up. Wherever Senator Warren goes, she gets a glimpse of the millions of people who want her leading the Democratic Party and want her voice in the presidential race. With your help, we can keep that going.

–Victoria, Erica, Alejandro, Milan, and the rest of the team

PAID FOR BY MOVEON.ORG POLITICAL ACTION, http://pol.moveon.org/. Not authorized by any candidate or candidate's committee. This email was sent to eddie alfaro on February 27, 2015. To change your email address or update your contact info, click here. To remove yourself from this list, click here.