Leading voices in the media are calling for a contested primary, Iowa's looking more competitive by the month, and Run Warren Run supporters hosted more than 220 house parties.

This weekend was a HUGE boost of momentum behind the nationwide movement urging Elizabeth Warren to run for president.

Just check out this sequence of events:

Thousands of Run Warren Run supporters attended more than 220 house parties in 46 states, D.C., Puerto Rico, and Guam to urge Elizabeth Warren to run for president. Here are just some of the photos that hosts and attendees shared from gatherings this weekend:

And some of the excited feedback we received after the parties, co-hosted by our friends at Democracy for America and Ready for Warren:

"A lifelong Republican is really excited about Elizabeth Warren. She likes Warren on the issues, but more than anything appreciates the clarity and forcefulness with which Warren speaks."—Eric H., a host from Manhattan, KS

"The woman who ran Obama's campaign office was knowledgeable and ready to start one in Portland for Warren."—Marilyn M., an attendee from Portland, OR

"I enjoyed seeing the attendees get excited about taking action. Also, how happy they were to find like-minded individuals to communicate with."—Julie M., a host from Mesa, AZ

The Des Moines Register—the newspaper of record in the state with the first presidential caucus—released poll results last week that showed a six-point jump in support for Elizabeth Warren since October of 2014.1 The results put Warren right where Barack Obama was this time of year in 2007, before he announced his run for president: 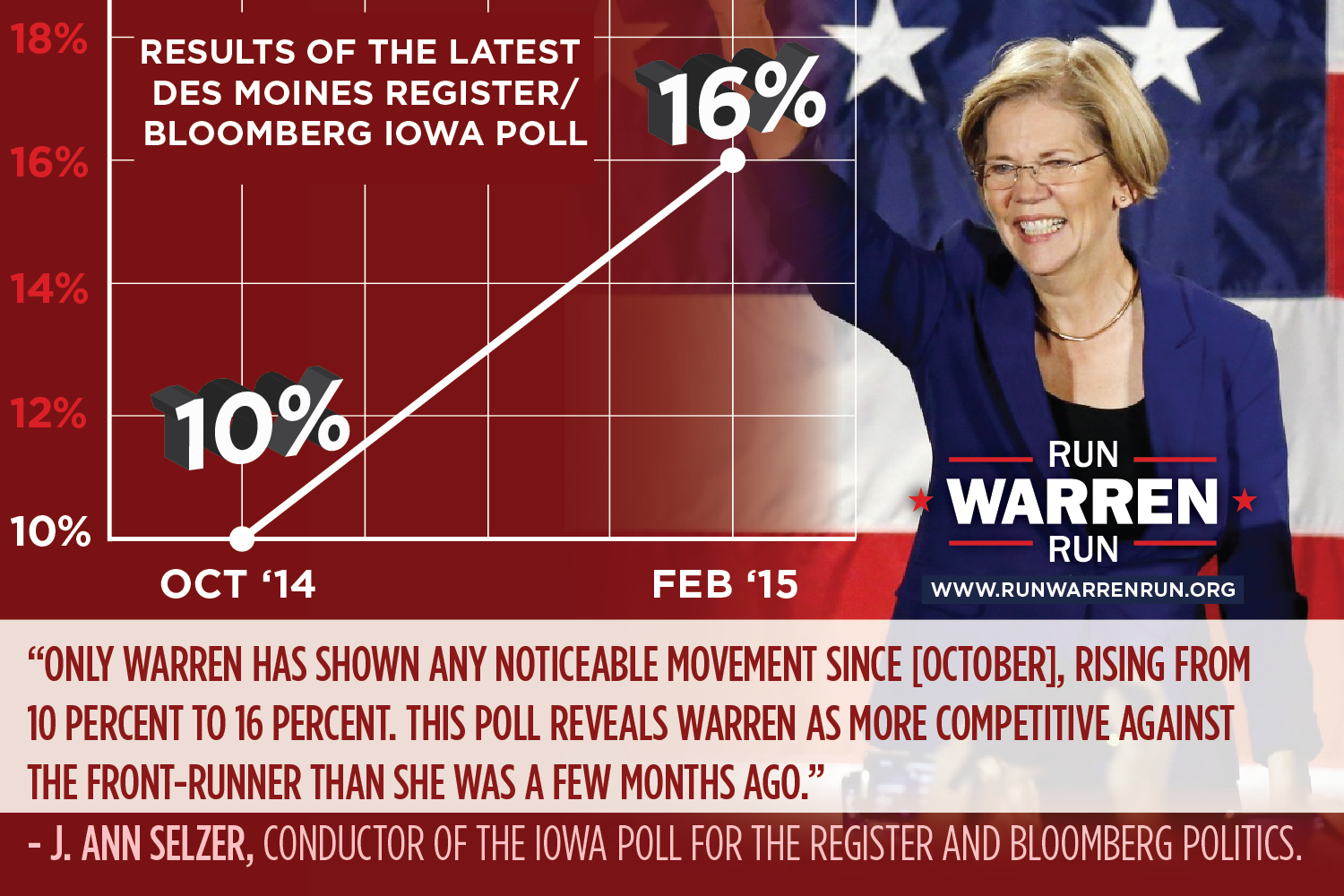 Last week, MSNBC's Rachel Maddow became the latest in a series of influential voices calling for the Democratic Party to hold a truly contested primary.2 Here's how Maddow put it: 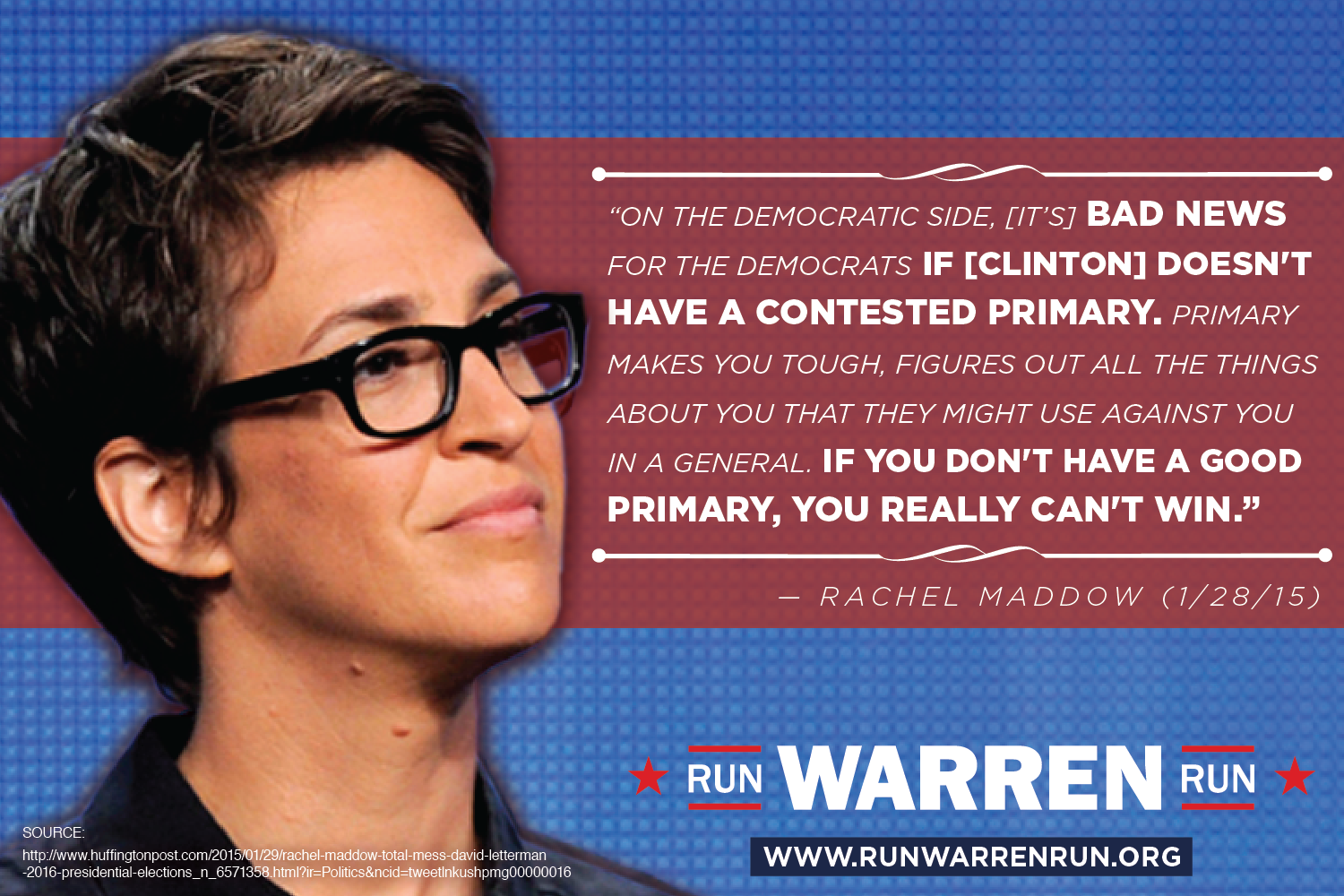 Statements like Maddow's are critical right now because they're stopping a dangerous D.C. idea—that the Democratic nomination's already been decided—from becoming mainstream consensus. In doing so, Maddow and others are creating breathing room for multiple candidates to join the race, for donors to hold their checks, and for party activists to stay excited about the possibility of someone new and boldly progressive announcing a run.

Most recent reports indicate the Democratic primary could be a wide-open field, with no declared candidates, until at least June or July—and the first caucuses and primaries are still a year away.3 That gives MoveOn members—along with our partners at Democracy for America and Ready for Warren—plenty of time to continue demanding a spirited, contested primary for the Democratic Party's presidential nomination, to keep raising Sen. Warren's profile and fresh ideas in the Senate, and to continue urging Sen. Warren to run for president.

If you're ready to take the next step right now, here are three ways you can get involved. Pick one and let's get started:

–Mark, Jo, Stephen, Justin K., and the rest of the team

PAID FOR BY MOVEON.ORG POLITICAL ACTION, http://pol.moveon.org/. Not authorized by any candidate or candidate's committee. This email was sent to eddie alfaro on February 2, 2015. To change your email address or update your contact info, click here. To remove yourself from this list, click here.