I've seen shutdowns before. This time is different.

Donald Trump's government shutdown has created total chaos in Washington. And let's be clear: This shutdown is 100% Trump's fault.

Donald Trump's government shutdown has created total chaos in Washington. And let's be clear: This shutdown is 100% Trump's fault. He says that he's "proud" of the shutdown, and that it will last "for a very long time."1

Earlier this week, the White House was signaling that Trump would accept a bipartisan funding deal. But then, he threw a temper tantrum at the 11th hour this Thursday (while senators were already on airplanes flying home from Washington, D.C.; they've since returned to deal with this Trump-created disaster).

We cannot cave in to Trump's madness. We need to rise up, right now, to demand that lawmakers on both sides put an end to this shutdown—and to make sure Trump bears 100% of the blame.

Will you chip in $3 to help MoveOn run emergency digital ads featuring Trump as a crybaby in Washington, flood Congress and Mar-a-Lago with calls this week and beyond, continue protesting in Washington, and more?

Never in the history of my 50 years in American political life has there been a time like this, when a bipartisan compromise was reached by Congress, but a president balked and unilaterally shut down the government.

And make no mistake: Trump doesn't give a fig about the safety and security of Americans. His reasoning for putting up a wall is based on a crisis that doesn't exist.

We cannot let Trump act like a crybaby who throws a fit when he doesn't get his toy, and we can't let him be the bully who holds America hostage. We don't encourage crybabies, and we don't let bullies win.

Will you chip in $3 to help make sure that Democrats and Republicans end Trump's shutdown without giving him one dime for his racist, wasteful border wall?

I can tell you from experience—I ran the Department of Labor during the 1996 shutdown—that most of these public servants will report for duty, because they care about the missions they're supposed to be upholding. But going without pay will strain their family budgets to the point that some, inevitably, will not be able to carry out those missions.

We absolutely cannot let Trump shut down the government to get his way. If we put up a fight, history (and MoveOn's past success in organizing during shutdown fights) shows that we can stop him.

Which is why I'm asking: Will you chip in $3 and help MoveOn act right now to reopen the government without Trump getting one dime for his hateful, wasteful border wall?

So far, House Speaker-to-be Nancy Pelosi and Senate Democratic Leader Chuck Schumer have been strong in their opposition to Trump's wall, but if Democrats get cold feet, they could decide to cut a bad deal at any time.

MoveOn members have often won shutdown fights—going back to the Bush years—securing full or near-full victories in many cases, without concessions. But that doesn't happen automatically or every time. Last January, Democrats caved to Trump in a government shutdown.2 We can't let that happen this time.

When we do win, it happens because of grassroots activism. The kind of grassroots activism that MoveOn members do every day. Democrats need to know that we have their backs and that we will support them while they work to force Trump to accept a bipartisan deal with no money for his racist, wasteful border wall. Are you in? Will you chip in $3?

Yes, I'm in! I'll chip in help make sure that Democrats stand strong and demand an end to this government shutdown without Trump getting one dime for his racist, wasteful border wall.

MoveOn is running digital ads featuring a graphic of Trump as a toddler throwing a temper tantrum. To drive the meme into the mainstream media, they even projected this image on the Immigration and Customs Enforcement (ICE) building in Washington, D.C. on Friday night: 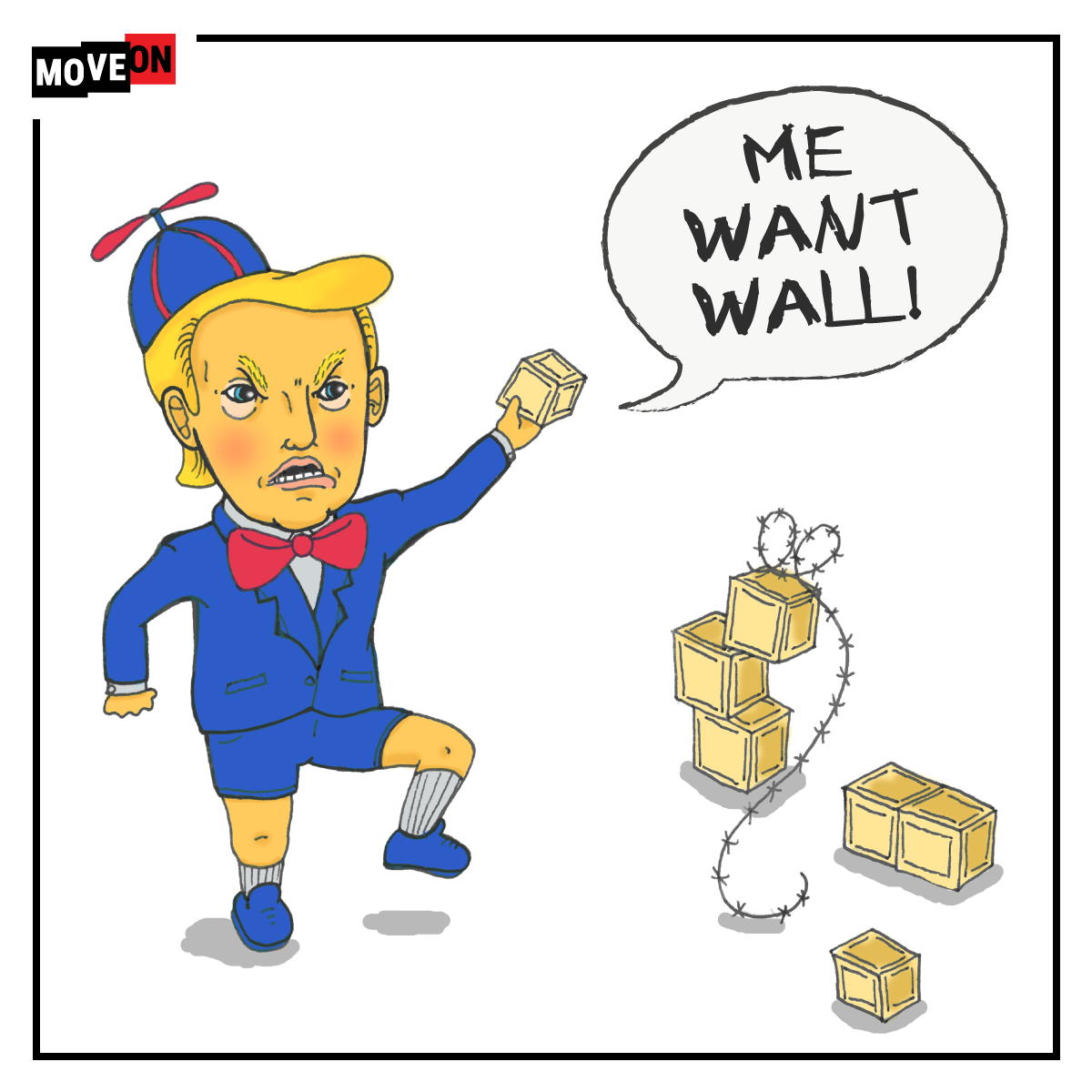 MoveOn is driving calls to Congress and to Mar-a-Lago during this holiday weekend. And they're gearing up for protests in Washington, D.C.

If Trump thinks that he can bully us into giving him $5.7 billion for his racist, wasteful border wall, he has another thing coming. It's time to fight back.

MoveOn staff are working overtime this holiday weekend and beyond to turn up the heat. And after an exhausting and expensive election year, MoveOn needs our help to do it.

Will you chip in $3 to fund MoveOn's emergency government shutdown work today?

Want to support MoveOn's work? The MoveOn community will work every moment, day by day and year by year, to resist Trump's agenda, contain the damage, defeat hate with love, and begin the process of swinging the nation's pendulum back toward sanity, decency, and the kind of future that we must never give up on. And to do it, MoveOn needs your support, now more than ever. Will you stand with MoveOn?

Contributions to MoveOn.org Civic Action are not tax deductible as charitable contributions for federal income tax purposes. This email was sent to Eddie Alfaro on December 22nd, 2018. To change your email address or update your contact info, click here. To remove yourself from this list, click here.