I'm writing from the set of my new movie to ask for your help in this critical governor's race in Virginia. Following the horrific and tragic events in Charlottesville a few months ago, the stakes in this year's elections couldn't be higher. I'm asking that you help by taking a few minutes to call progressive Virginia voters—from the comfort of your own home—and ask them to vote for Ralph Northam for governor and Justin Fairfax for lieutenant governor on November 7.

What happens in Virginia's election will impact the politics of our entire nation and that's why I'm asking you to make calls from whichever state you live in to express to our brothers and sisters in Virginia just how important this election is to all of us. You can start making calls anytime between now and election day by clicking here.

Virginia is a place near and dear to my heart. I grew up in Virginia Beach and went to high school there. I surfed, wrestled, and got my start as an actor there performing in high school plays. It's a beautiful state with beautiful people, but unfortunately, racism continues to rear its ugly head there as well.

Just look at what's led up to this election. First there were the horrific displays of hate in Charlottesville and the murder of Heather Heyer by a white supremacist. After Trump called white supremacists and neo-Nazis there “very fine people,” I joined with hundreds of activists marching from Charlottesville to D.C. to denounce hate and demand Donald Trump be removed from office.

Now, with just two days left until Virginians vote to choose their next governor, the same kind of racist rhetoric is infecting this election.

Republican candidate for governor Ed Gillespie has run a campaign with racist undertones to appeal to Trump's base. For instance, Gillespie and Trump keep talking about protecting Virginia's many statues—a clear nod to the Confederacy. Millions of dollars have been spent by Gillespie on TV ads like one that prominently features the Confederate statue in Charlottesville, quoting Democratic candidate Ralph Northam on how he will take the statues down. Gillespie then states matter-of-fact, directly to the camera, that he will keep all the statues up. It’s the same kind of racist fearmongering that Trump uses every day and is now normalizing as part of our elections.

A vote for Gillespie is a vote in support of Trump, and we need to make sure Gillespie and Trump are soundly defeated in Virginia. Unfortunately, some polls have Gillespie tied with Democratic candidate Ralph Northam; the result on Tuesday could go either way. The outcome of this election won’t just impact the lives of millions of Virginians, it will also be a preview of 2018. Are we going to stop this rising tide of hatred by electing leaders who reject hate and bigotry? That’s what’s at stake next Tuesday.

So we need your help. Virginia is for lovers—not haters. But Republicans are firing up right-wing voters with hateful rhetoric—so we need to fire up our base of voters as well and encourage them to get out, bring a friend, and VOTE.

That’s why MoveOn is teaming up with Indivisible for a national virtual phonebank over the next three days to make tens of thousands of calls to progressive voters in Virginia who might otherwise stay home. Can you join us for a 2 hour calling shift? The calls are super easy and critically important.

If you can’t make calls, please chip in $3 to help fund MoveOn’s get-out-the-vote efforts in Virginia.

P.S. That's me marching with activists in the wake of Charlottesville. Now, we need to march to the ballot box on Tuesday—and all of us around the country can do our share by calling Virginia voters any day between now and when the polls close. 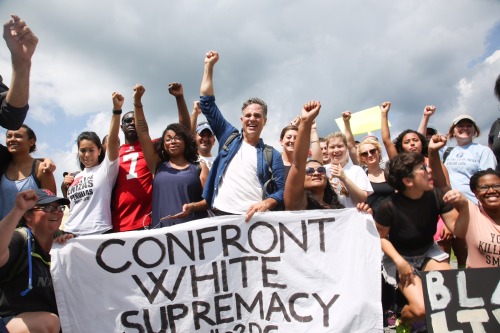