WATCH: These voters are fed up

A powerful message from former voters and volunteers of a key Republican senator.

As chair of the Senate Judiciary Committee, Senator Chuck Grassley is the central figure in the Republican blockade of Judge Merrick Garland, President Obama's nominee to fill the vacancy on our nation’s highest court.

That’s why, as Sen. Grassley returns home to Iowa this week, MoveOn members who have voted and volunteered for him in the past are coming together with a simple message for the senator: "Sen. Grassley, you've lost our respect and our votes by playing politics with the Supreme Court."

Will you watch and share our powerful, two-minute video to pressure Chairman Grassley to back down—and start a domino effect that leads to hearings and an up-or-down vote on President Obama's nominee? 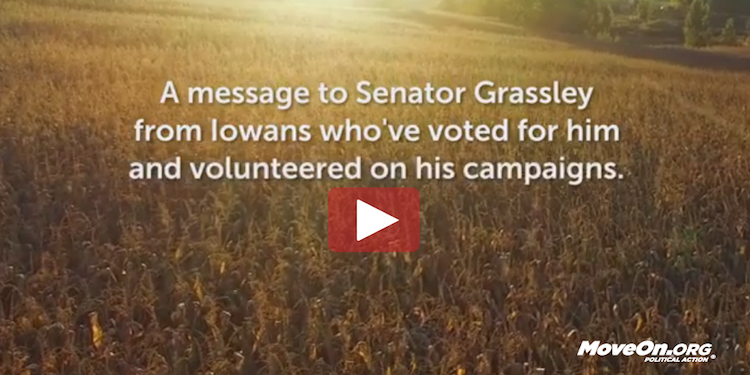 Sen. Grassley is up for re-election in the fall. Today’s video release comes on the heels of a new poll showing that his favorability ratings in Iowa are dropping because of his obstruction of the Supreme Court nomination.1

We can break the Republican blockade—if enough of us shine a spotlight on Sen. Grassley's obstruction and the wave of opposition he's facing at home. After all, he is the senator who can call and hold a hearing and an initial committee vote. Will you watch and share this video right now?

Since mid-February, MoveOn members have led an all-out campaign to pressure Senate Republicans to do their jobs. Together with allies, we've collected nearly two million petition signatures, made tens of thousands of calls to Congress, held national days of action, flown planes over district offices, asked for tax refunds from the do-nothing GOP—and more than 20,000 MoveOn members have already chipped in to fund this campaign.

Now, we're bringing the campaign home to Sen. Grassley, the ringleader of the opposition. By raising and amplifying the voices of his outraged constituents, we'll help make it clearer than ever to the senator that his job is on the line if he doesn't back down.

Please watch and share a powerful, two-minute video message to Sen. Grassley and help deliver a breakthrough message in Iowa: Either do your job now, Sen. Grassley, or risk losing it come Election Day.

—Jo, Emily, Brian, Hannah, and the rest of the team

P.S. If you’re not on Facebook, you can watch and share the video message to Sen. Grassley by clicking here.