Leave your message at the tone

We're launching VoicemailsforWarren.com because Elizabeth Warren needs to hear from us about why she should run for president. Will you call and leave your message today?

We've shared the story before of Elizabeth Warren's decision to run for the Senate a number of years back. In her book, A Fighting Chance, Warren narrates the key moment that persuaded her to run: A woman had walked two miles to hear Warren speak and share her struggle to find a job. Though Warren had previously decided in her "heart of hearts" not to run, that woman, herself teetering "on the ragged edge of the middle class," asked Warren if she would fight for her. That was the moment that Senator Warren committed to the race—and the progressive movement's been benefiting ever since.1

We can help recreate that moment—this time with an even bigger election at stake—by helping Sen. Warren to hear our personal, heartfelt messages explaining why we want her in the race for president.

That's the purpose of Voicemails for Warren—a project to collect and deliver thousands of recorded messages asking and encouraging Elizabeth Warren to run for president in 2016.

Will you leave your message at the tone? Click here to visit VoicemailsforWarren.com and share your personal reason for wanting Sen. Warren to run. 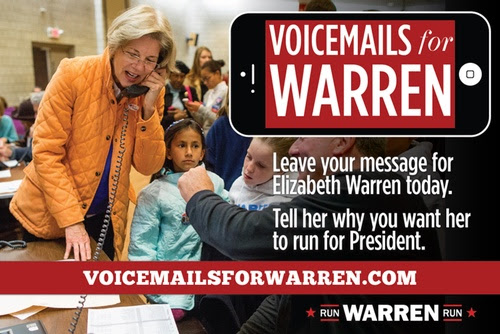 Our strategy to get Sen. Warren into the race is firing on all cylinders. We're building real grassroots excitement in early states. Our visibility events in Iowa were all over the news last week—including an appearance on "The Rachel Maddow Show." More and more people are making the call for a contested primary, including progressive champion Van Jones, who said Elizabeth Warren is "the name that's on the lips of every grassroots Democrat right now."2 Together, we're changing the conversation.

But one thing we're certain of is that Sen. Warren needs to know running for president right now is worth the grueling campaign it'll take to win. She needs to know the people who are counting on her to fight for them—against big banks, student debt, or dwindling retirement funds. In short, she needs to know our stories—and she needs to hear them in our voices.

So will you call and share your story today?

Tell the senator about the student loan debt holding back your career and ambitions. Or about the home that was taken from you by the banks in the Great Recession. Tell her about the job you or a loved one lost when manufacturing started being moved overseas. Or how your family would benefit from a raise in the federal minimum wage. Tell her about the hope you felt when you first heard one of her incredible speeches.

Whatever message you have for Sen. Warren—now's the time to share it. Visit VoicemailsforWarren.com today and leave your message for Elizabeth Warren.

We'll take the messages and deliver a compilation to Sen. Warren.

–Victoria, Bobby, Jo, Mark, and the rest of the team

PAID FOR BY MOVEON.ORG POLITICAL ACTION, http://pol.moveon.org/. Not authorized by any candidate or candidate's committee. This email was sent to eddie alfaro on February 16, 2015. To change your email address or update your contact info, click here. To remove yourself from this list, click here.