Presidents Day in Inwood : Show Elizabeth Warren we've got her back


Last weekend we held more than 220 house parties across the country and thousands of members got together to plan the next step in the Run Warren Run campaign. It was a great chance for everyone to meet other progressives in their communities who share a vision of Elizabeth Warren getting into the 2016 presidential race.


But we need to do more than meet in homes with people who agree with us; we need to be out in our communities letting people know there's a campaign to draft Elizabeth Warren to run for president and sharing why we think others should join in.


That's why, on Presidents Day weekend—February 14, 15, and 16—we're going out into neighborhoods across the country to show our support for Elizabeth Warren to let people less politically active know about the Run Warren Run campaign.


Visibility action are an easy, traditional, and effective way to earn media attention and share a message with commuters and pedestrians passing by. We already hosted one successful round of them last month—but now it's time to go bigger!


Will you help by hosting a Run Warren Run Presidents Day visibility event in Inwood next Saturday, Sunday, or Monday, February 14-16?


We'll provide materials and support to help you have a great event. Click here to learn about them.


Here are some great ideas from fellow MoveOn members planning actions for Presidents Day weekend—you can borrow one of their ideas or create your own.

"Bring the call for a future president to the Minneapolis Skyway. Dress as a president, first lady, or Lady Liberty who wants Elizabeth Warren to #RunWarrenRun and to vote for her in 2016."—Henry C., Minneapolis, MN

"It's Valentine's Day! Come show the love for Elizabeth Warren. Hold a sign and wave to neighbors to pique their interest in the most progressive candidate."—Alan W., Westlake Village, CA

"Set up booths near Presidents Day out in the community. Near banks to educate people regarding Elizabeth Warren's efforts to regulate banks, etc., and to drum up some grassroots momentum." —Margaret S. San Diego, CA


Elizabeth Warren has been the voice for working- and middle-class families. She brought the fight against Wall Street to the Senate floor, and if we can show her the grassroots support she has to get into the race for president, she'll take that same fight with her to the Democratic primary debates.


Will you share with your community that you and others support the Run Warren Run campaign?

Yes, I would like to host an action on Presidents Day weekend!


Thanks for all you do.
—Alejandro, Justin R., Jadzia, Brian, and the rest of the team


P.S. Check out what other MoveOn members have done in the community to share their support for Run Warren Run—then sign up to host your own event: 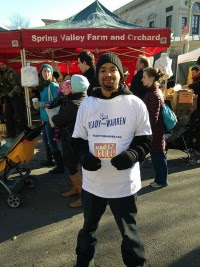 PAID FOR BY MOVEON.ORG POLITICAL ACTION, http://pol.moveon.org/. Not authorized by any candidate or candidate's committee. This email was sent to eddie alfaro on February 5, 2015. To change your email address or update your contact info, click here. To remove yourself from this list, click here.