We need your creativity! Can you spell our RUN WARREN RUN and take a picture?

The effort to convince Elizabeth Warren to run for president is gaining steam.

Last weekend people gathered in over 220 house parties to talk about how they can further the effort locally. And the media have begun to recognize this campaign as a serious force.

But if we want to convince Senator Warren to run we can't just say it. We need to say it big.

So we're asking: What's the most creative way you can spell out RUN WARREN RUN?

We've already seen hundreds of creative photos of people supporting the effort to get Senator Warren to run, like this awesome picture sent in by MoveOn members in Western Massachusetts: 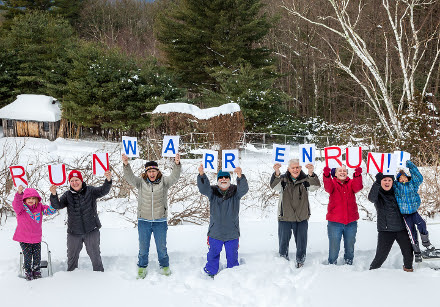 We know this community is brimming with creativity. So whether it's writing RUN WARREN RUN in five foot letters in the snow (we're looking at you, New England!) or spelling it out as a human tower; whether it's dressed in costume or etched in stone—we want to see it!

In a week, on Presidents Day, MoveOn members will be gathering together to do visibility events in support of the Run Warren Run campaign. We'll share the best submissions by then and blow some of them up to a huge size to include them in the visibility events as well.

So let's get started now. How will you spell out RUN WARREN RUN?

PAID FOR BY MOVEON.ORG POLITICAL ACTION, http://pol.moveon.org/. Not authorized by any candidate or candidate's committee. This email was sent to eddie alfaro on February 8, 2015. To change your email address or update your contact info, click here. To remove yourself from this list, click here.