Add your name: Thank the FCC for voting for Net Neutrality

The FCC just released the full text of the historic Net Neutrality rules that MoveOn members like you have fought for for nearly a decade, and they confirm that we've won a huge victory—and that Comcast, Verizon, and their friends in Congress continue to lie.

Click here to thank the FCC for protecting the open Internet!

Now, Republicans in Congress are putting the three FCC commissioners who stood with us and voted for an open Internet through the ringer—with not one, not two, but three hearings this week on the new Net Neutrality rules. And two more hearings the week after.

We need to let the FCC commissioners who did the right thing know that we've got their back—that Internet users everywhere appreciate what they've done to stand with us, and that they've got our support as they approach the gauntlet.

Will you add your name to the thank-you note to the three FCC commissioners who voted for Net Neutrality—Chairman Tom Wheeler and Commissioners Mignon Clyburn and Jessica Rosenworcel?

We'll deliver your signatures this week as these hearings get underway, so that the the FCC, members of Congress, and the media know that these historic Net Neutrality rules are here to stay. 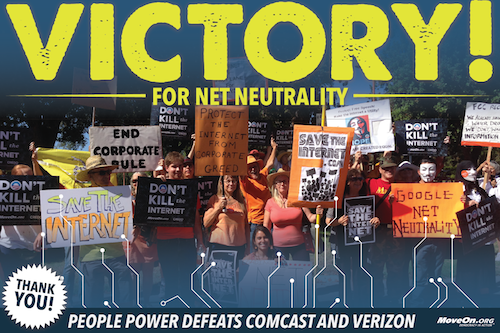 Our friends at Fight for the Future put together this easy-to-read summary of the contents of the FCC Net Neutrality rules that was so helpful we wanted to pass it along:


You can read them in full here—but since it's 313 pages (of fiery, Comcast-slaying justice), we wanted to give you a quick rundown of what the rules do and don't do. But don't stop reading after the summary, because Comcast is already on the attack and there's more to do right now.


All of that is to say two simple, wonderful words: we won. And not only that, we won because of the work of people like you. Activism is mentioned time and again in the rules, and there's barely an article written that doesn't talk about it.

(Thanks, Fight for the Future, for that great summary!)


Help defend the victory that you made possible by thanking the three FCC commissioners who voted for Net Neutrality as they come under attack by Big Cable and their allies in Congress.

–Maria, Victoria, Jadzia, Milan, and the rest of the team