It's a potentially game-changing development—and comes on the heels of four months of powerful organizing by MoveOn members and allies as part of our Run Warren Run campaign.

Today, the editorial board at the Boston Globe, one of the nation's largest newspapers and the leading publication in Elizabeth Warren's home state of Massachusetts, called on Senator Warren to run for president.

It's a potentially game-changing development—and comes on the heels of four months of powerful organizing by MoveOn members and allies as part of our Run Warren Run campaign.

Take a look at this excerpt from their piece, then click here to read the entire article:

Some of Warren's admirers feel she'd be better off fighting for those causes in the Senate—but her opportunities to enact reforms there are shrinking, which should make a presidential run more attractive. As a member of the minority party in the Senate, her effectiveness is now much more limited than when she first won election, since Republicans control the legislative agenda. Democrats face an uphill challenge to reclaim the Senate in 2016 and face even slimmer prospects in the House. For the foreseeable future, the best pathway Warren and other Democrats have for implementing their agenda runs through the White House.

A presidential campaign would test Warren as never before. Her views on foreign policy are not fully formed. And on many other important issues—climate change, gun control, civil rights—Warren could struggle to articulate clear differences between herself and Clinton. That's a risk she should be willing to take.

If Warren runs, some Massachusetts voters are bound to see it as abandoning the state that sent her to the Senate—but that shouldn't discourage her either. Senators Edward M. Kennedy and John F. Kerry pursued their presidential ambitions without suffering much of a backlash at home. If Warren runs with conviction, and can clearly articulate voter unease with the widening divide between the 1 percent and the struggles of middle-class Americans, her candidacy will be welcomed.

From rallying more than 310,000 supporters, to building a larger campaign infrastructure in Iowa than any expected candidate, to creating growing consensus that tackling income inequality should be central to this coming presidential election, MoveOn members have been setting the conversation and creating the space for a transformative presidential candidacy from Elizabeth Warren.

–Ilya, Jadzia, Ben W., Brian, and the rest of the team

P.S. Here's a look at the Ideas and Opinions section of today's Boston Globe: 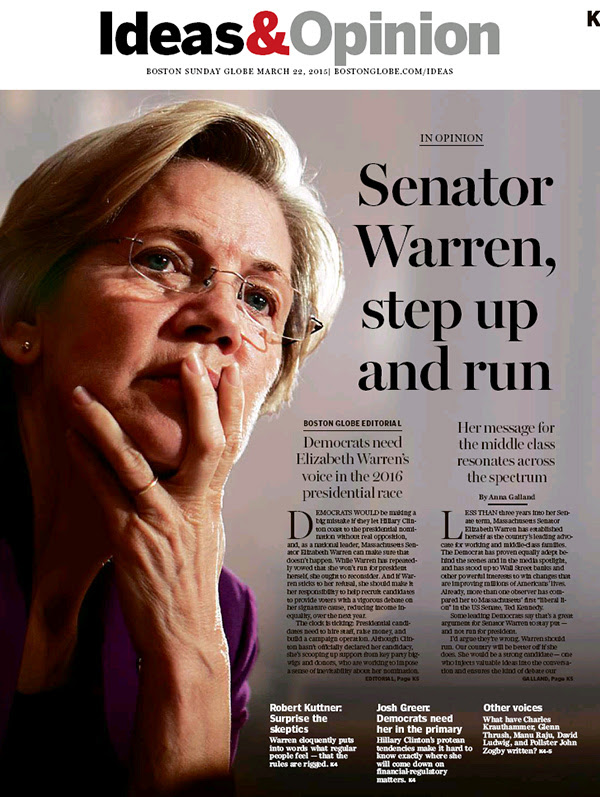 PAID FOR BY MOVEON.ORG POLITICAL ACTION, http://pol.moveon.org/. Not authorized by any candidate or candidate's committee. This email was sent to eddie alfaro on March 22, 2015. To change your email address or update your contact info, click here. To remove yourself from this list, click here.