There's never been a better time to remember why we're working our hearts out. Why we're giving it our all.

Amid the constant barrage of hate and negativity from the Trump campaign, it can be natural to get frustrated, even angry. But that's all the more reason why this is a critical moment to remember what we are hopeful for in this election. Why we're giving it our all.

Because here's the thing: The real antidote to Trump's poisonous words and actions is not more anger; it's a clear and common vision of the better nation we can and must create together.

That's why MoveOn's kicking off our United For campaign. With MoveOn members coast to coast, we'll harness the energy and inspiration we all need to push through to Election Day (and every day after that).

Will you take a quick picture to share what you're voting for on Election Day? (It's really easy to participate. Just click this link to get started!)

We all know that the stakes surrounding this election couldn't be higher. In response, MoveOn members have gone all in on United Against Hate, a massive campaign to defeat Donald Trump and reject his hateful, bullying politics.

Helping Hillary Clinton defeat Donald Trump and helping Democrats take back the Senate is essential. And what's equally important are our efforts to lift up a progressive vision of what MoveOn members and our fellow Americans are united for—the values, ideals, hopes, and dreams that will motivate us to vote on Election Day and stay engaged in the necessary work of progressive social change beyond November.

Take a look at a few of the great photos we've already received! Then help inspire others by adding a photo with the reason you're voting. 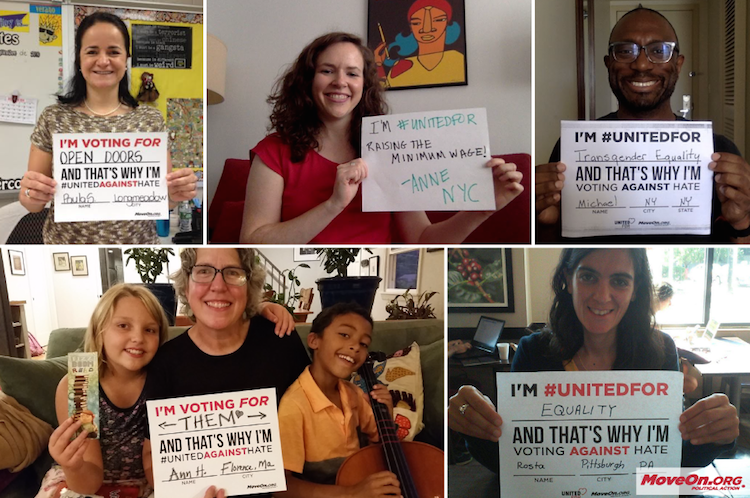 Have three minutes to help win this election and crowdsource a bold vision for our future?

After you click the link, you'll be able to download a sign and write in what you’re voting for. Then, take a photo with the sign and submit it using the link provided. It's as simple as that! (And if you don't have access to a printer, simply write your thoughts on a piece of paper or type them on a computer screen and snap a photo. That's great too.)

MoveOn members’ United For photos will:

We have 47 days until Election Day, which means we have a very short window of time to get progressives really excited about voting. We don’t have a moment to waste.

We know from polling data, including research that MoveOn commissioned, that many voters who could decide this election—millennials, single women, communities of color, immigrants, and the most passionate Bernie supporters—dislike and reject Donald Trump. But they're also looking for motivation to stay involved with the election beyond what we're united against. Let's help motivate them (and ourselves) by showing what we're united for.

Tell us what you’re voting for this November. Click the link to get started.

—Jo, Iram, Stephen, Matt, and the rest of the team

P.S. This project isn't asking WHOM you're voting for. As a community, we're uniting to defeat Donald Trump, elect Hillary Clinton, and elect MoveOn-endorsed Democrats to the Senate. United For is about WHAT we're voting for—the issues, values, and vision for the future that are motivating each of us to vote.

Want to support MoveOn's work? Senator Elizabeth Warren says, "I'm so enthusiastic about MoveOn's smart and targeted plan to hire a network of organizers in key battleground states to mobilize and train volunteers to knock on hundreds of thousands of doors. It's bold and ambitious—and exactly what is needed to help swing Senate races, resoundingly defeat Donald Trump, and give Democrats a fighting chance to take back the House." Will you chip in to help make it all possible?