Across 17 states, people in prison just completed an unprecedented two-week strike that has involved sit-ins and work slowdowns. This was one of the largest prison strikes organized in U.S. history.

This is a different type of email than one MoveOn may normally send. I'm not asking for donations. I'm not even asking you to sign a petition or make a phone call.

But there's some incredible, revolutionary organizing happening across the country being led by people in prison. And I wanted to make sure you heard about it, because it's not getting much mainstream media coverage.

Across 17 states, people in prison just completed an unprecedented two-week strike that has involved sit-ins and work slowdowns. This was one of the largest prison strikes organized in U.S. history. And they did it because they are being subjected to unconscionable conditions, relentless violence, and forced labor that is a form of modern-day slavery.

Watch and share this short video on Facebook to hear from formerly incarcerated people and prison rights organizers on what's happening. 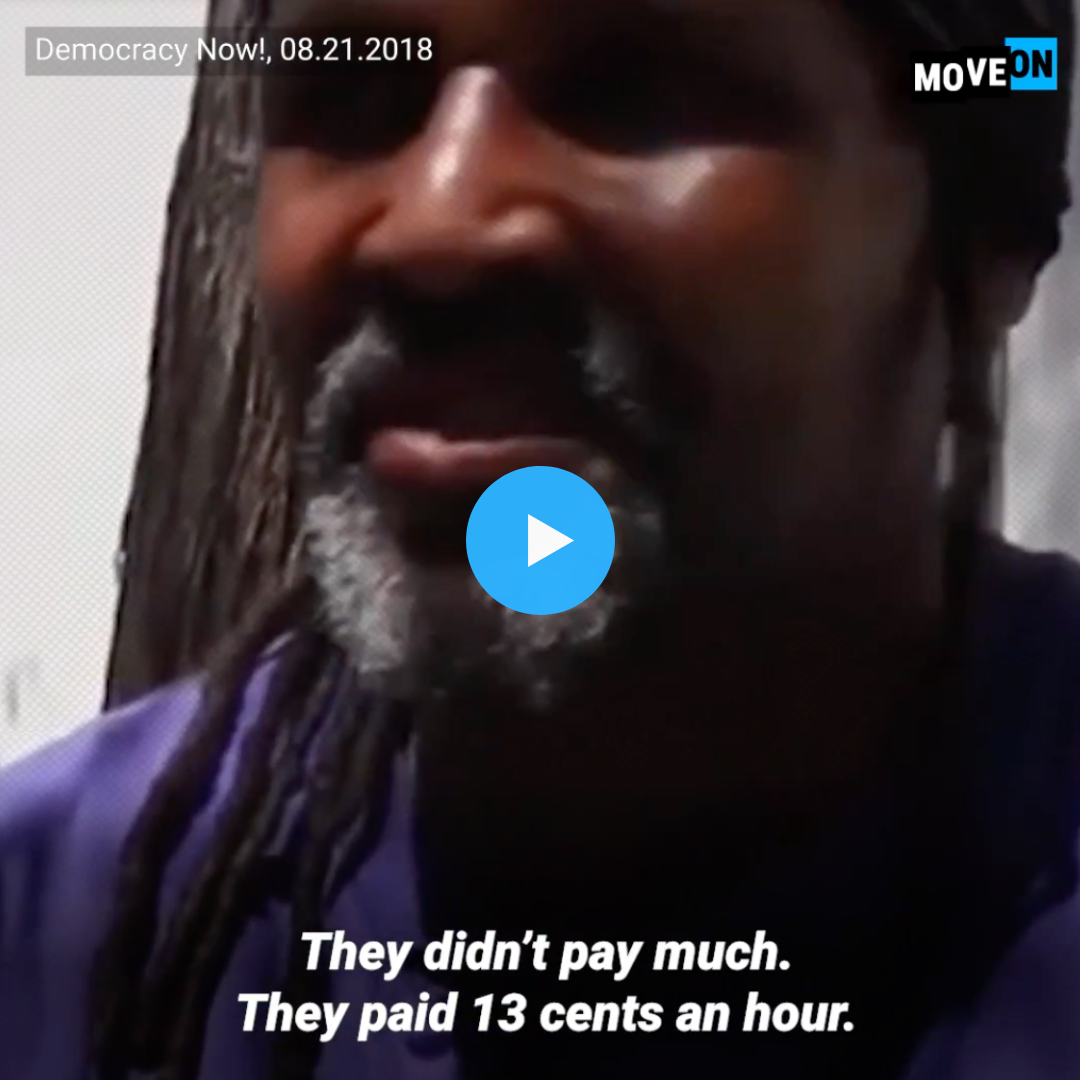 Many incarcerated people are often forced to work with minimal or no pay in strenuous jobs. Just last month, there were incarcerated individuals fighting fires in California for just $1 an hour—though they won't even qualify to get jobs as firefighters in California once they're out of prison.1

In states such as Alabama, Arkansas, Florida, Georgia, and Texas, incarcerated people receive no pay for their labor.2 And there are public buildings and state legislatures that often use prison labor without paying the workers a fair wage.3

Everyone assumes that slavery ended with the 13th Amendment, but the amendment reads as follows:

Section 1. Neither slavery nor involuntary servitude, except as a punishment for crime whereof the party shall have been duly convicted, shall exist within the United States, or any place subject to their jurisdiction.

Section 2. Congress shall have power to enforce this article by appropriate legislation.

The 13th Amendment to the Constitution actually created an intentional loophole that legitimized slavery—and is used to this day to force people in prison to work with little to no pay. And courts have continued to uphold this view.4

Just as teachers fought for higher pay in West Virginia through a strike, I see these people as fighting for their rights as workers and as people who should be treated with dignity under a truly unjust system.

These were the 10 demands of the prison strike:5

As we get closer and closer to the election in November, I can't help but have their last demand—the right to vote, to participate democratically in the fundamental act of how we shape our society—anger and inspire me.

Watch the video created by MoveOn's very own Video Lab team and see if it inspires you too.

So often, when we think of democracy—and creating the democratic society we all deserve, not the imperfect one we were handed—we often forget those who are excluded from participating at all. Across the country, there are states that completely bar any formerly incarcerated person from voting.

Some states are making progress—New York recently granted many parolees the right to register to vote, and in Florida, the "Second Chances" ballot initiative this November could restore voting rights to over a million people who have a lifetime ban on voting because of prior convictions. But there is so much more we can do, starting with learning about the conditions within prisons, hearing from the people most impacted, and sharing the story of this historic strike.

At this moment, I have intense hope, because there are people envisioning a more perfect democracy that we all deserve. And as progressive candidates seek election across the country and some even look toward 2020, let's help ensure they're paying attention to this new vision too.

Watch and share the video to spread the word by clicking here.

–Iram, Reggie, Sara, Shaka, and the rest of the team