Our response to the RNC

We knew the Republican National Convention was coming to Ohio. And two months ago, local Ohio organizers reached out to us wanted to do something proactive in response to the hate mongering of the RNC setting up shop on their turf.

For months, we've known the Republican National Convention was coming to Ohio—and sure enough, it arrived last night complete with angry rhetoric against immigrants and Muslims, plagiarism, and tirades against political correctness. We can only expect more of the same—or worse—over the nights ahead.

But this past weekend, MoveOn members and local organizers across Ohio had a bold and uplifting response to the Republican convention: #OhioAgainstHate—a door-to-door campaign where Ohio neighbors spoke to each other about the importance of voting against Donald Trump and his hate, bigotry, and xenophobia.

#OhioAgainstHate brought out many first-time canvassers who eagerly spoke to neighbors, voters, and even their former students! 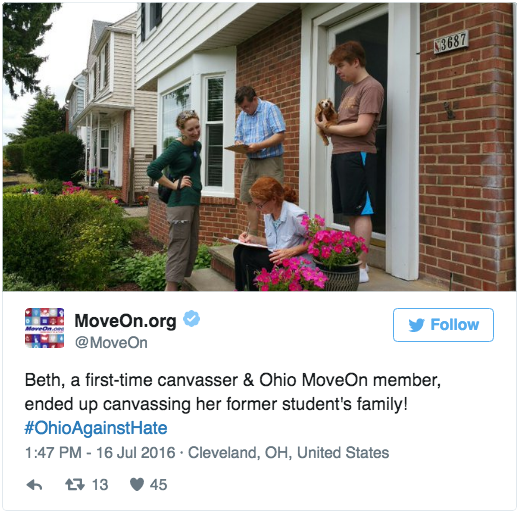 Pokémon Go isn't the only thing bringing millennials out to the sidewalk; #OhioAgainstHate attracted our two youngest canvassers, Marta and Emma (pictured below). They're millennials who want to ensure Trump doesn't make it to the White House and who understand the power of young people in this election. 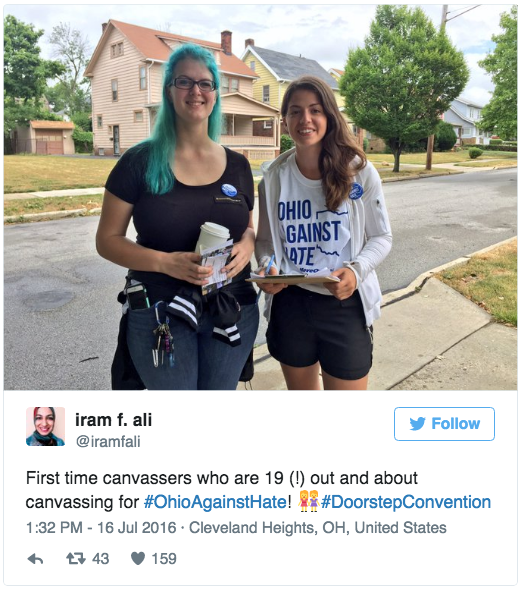 From coffee shops to a local fabric store, small business owners who cared about the messages of unity and love we were looking to spread throughout Ohio donated most of the meet-up spots for our canvassers. And our volunteers looked fabulous in their #OhioAgainstHate swag. 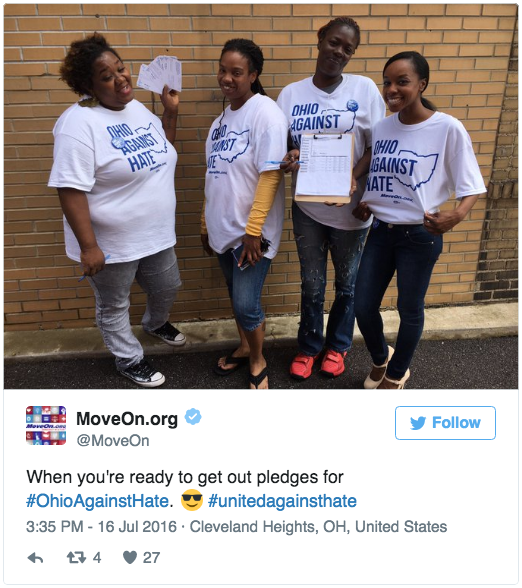 #OhioAgainstHate even had the support of former Ohio state senator Nina Turner, who came out to canvass on Friday afternoon and left a message for how the RNC should behave while in her hometown of Cleveland. 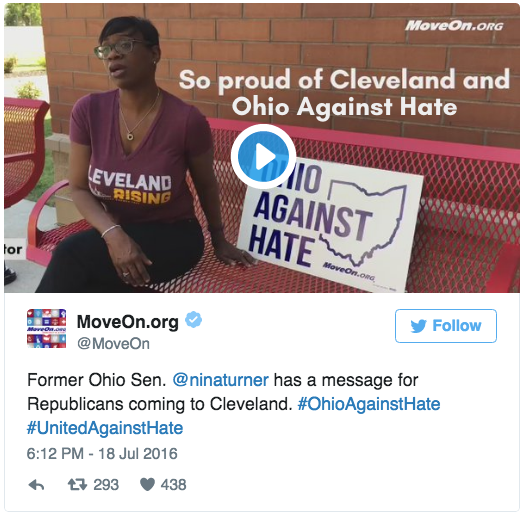 Not only did MoveOn members and our allies reach out to thousands of voters in Ohio, we trended on Twitter in Ohio and Twitter even selected #OhioAgainstHate as one of its big "moments" of the day—which means millions more people heard our message of voting to stop Trump.

Research shows that face-to-face voter outreach is most cost-effective way to persuade voters. That's why we're getting ready to apply the lessons we learned in Ohio—from how to harness social media attention to maximizing the impact of new technology—nationally. Our goal? To launch grassroots voter mobilizations in the 10 battleground states that will not only decide the presidential race, but also decide who controls the Senate—and maybe even the House.

To pull it all off, we need your ongoing support. Will you help out with $3 a month?

Yes, I'll make a monthly donation to help ramp up MoveOn's actions to defeat Trump and his message of hate, take back the Senate, and involve more voters in the election.

No, I can't become a monthly donor today.

We hope this glimpse into the powerful organizing of everyday Ohioans in response to the Republican National Convention was a good chance to take a break from the constant barrage of division and hate coming out of the RNC. If you enjoyed reading about #OhioAgainstHate and feel like more people should see this, forward it to five of your friends or family members.

—Victoria, Manny, Ilya, Iram, and the rest of the team