BREAKING: We marched to the White House and WON!

We delivered over 341,000 signatures to the White House to make it clear: President Obama can act right now to dismantle NSEERS.

Last week, hundreds of MoveOn members and allies, led by Muslims who would be affected by Donald Trump's registry, marched to the White House as part of a big campaign to demand that President Obama do his part to prevent the registry from being built.

People from all backgrounds showed up to stand with Muslim communities. We chanted, we sang, we marched, and we listened to stories of those who have been directly affected by the National Security Entry-Exit Registration System (NSEERS), which is the Bush-era registry program used to target and detain immigrants from Muslim-majority countries. We called on President Obama to shut down NSEERS, completely, once and for all, before Trump takes office.

And we have some amazing news to share: We won!

President Obama and the Department of Homeland Security are officially shutting down NSEERS once and for all.1 There's much more to do, but today's victory puts one more critical hurdle in Trump's way to prevent him from targeting Muslim communities and starting a Muslim registry. 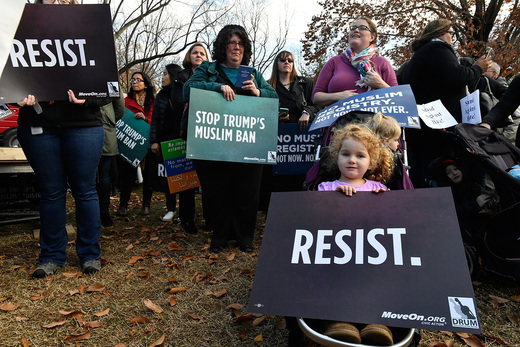 In these moments, before Trump takes office, it's important to begin building broad coalitions—especially to stand in solidarity with communities that will be on the front lines of Trump's vicious policy agenda. Our march and campaign did just that—it brought together a diverse group of people to stand with Muslim communities and fight back against the entire idea of a "Muslim registry." And we worked closely with our allies at DRUM (Desis Rising Up and Moving), whose membership was directly affected by NSEERS. The march last week showed what's possible when people stand together and rise together.

We have to tell the story of people coming together now—before he's even in office—to resist Donald Trump. Will you click here to share pictures from the #NoMuslimRegistry march on Twitter and to share the good news? 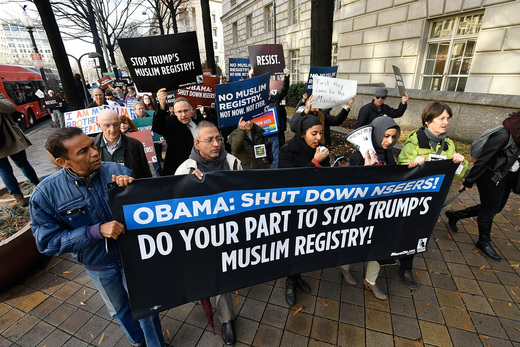 Just yesterday, a reporter asked Donald Trump if he was reconsidering his proposals of building a Muslim registry or banning Muslims. Trump responded, "You know my plans."2

After campaigning on anti-Muslim policies, Trump seems to be doubling down on making sure that his proposals become a reality. Well, we're not stopping, either.

And today's news shows what's possible when we stand up and fight back against fascism: we win. 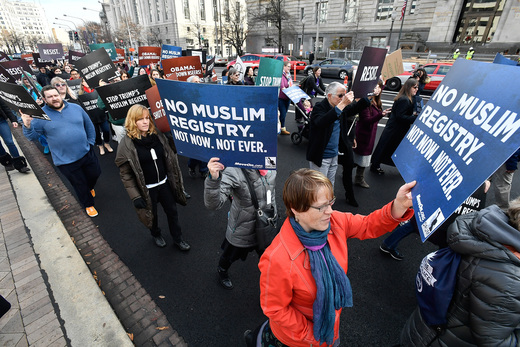 Last week, we also delivered over 341,000 signatures to the White House, collected by MoveOn.org and allied organizations, including DRUM (Desis Rising Up and Moving), CREDO Action, MomsRising, Bend the Arc Jewish Action, and the ACLU. This coalition of groups is representative of the larger, diverse, vocal, and committed constellation of organizations who will not stand silently by as anti-Muslim attacks accelerate and discriminatory policies are enacted.

This outpouring of public support—in the form of hundreds of thousands of signatures and hundreds of marchers—shows what's possible when we stand together. We are the majority. And we will continue to win.

—Iram, Maria, Scott, Mark, and the rest of the team

P.S. Click here to watch and share an AJ+ video on Facebook that discusses our march to the White House and further explains the NSEERS program.

P.P.S. If you're not on Facebook or Twitter, please forward this email to your friends and family so they hear about the wonderful news!

Contributions to MoveOn.org Civic Action are not tax deductible as charitable contributions for federal income tax purposes. This email was sent to Eddie Alfaro on December 22nd, 2016. To change your email address or update your contact info, click here. To remove yourself from this list, click here.