Your voice and your actions just helped save health care for millions of Americans.

This afternoon, House Speaker Paul Ryan pulled the Republican health care bill from the House floor. Donald Trump pushed hard to pass the bill, but in the end, the Republican leadership simply did not have the votes to pass it.

And it's because of one thing and one thing only: Your unprecedented grassroots resistance, alongside millions of other Americans, since the election—your nonstop calls, personal stories, town hall meetings, protests, Tweets, and other actions to fiercely defend health care for millions of Americans. MoveOn members made over 40,000 calls to Congress just today! The Washington Post reported that calls were running 48-to-1 against the bill.1

All these calls and other actions forced more members of the Republican caucus from moderate congressional districts to come out against the bill today in the final negotiations, as the GOP leadership gave additional concessions to secure the votes of the far-right "Freedom Caucus." And you helped strengthen Democrats and keep them united in opposition to the bill every step of the way.

Make no mistake about it: This bill has been the GOP's top priority. The GOP and Fox News have been obsessively railing against the Affordable Care Act for seven years. Every single GOP member campaigned on repealing it.

But the resistance movement just stopped them in their tracks and handed Trump and the GOP a HUGE legislative defeat. Will you share this graphic right now? 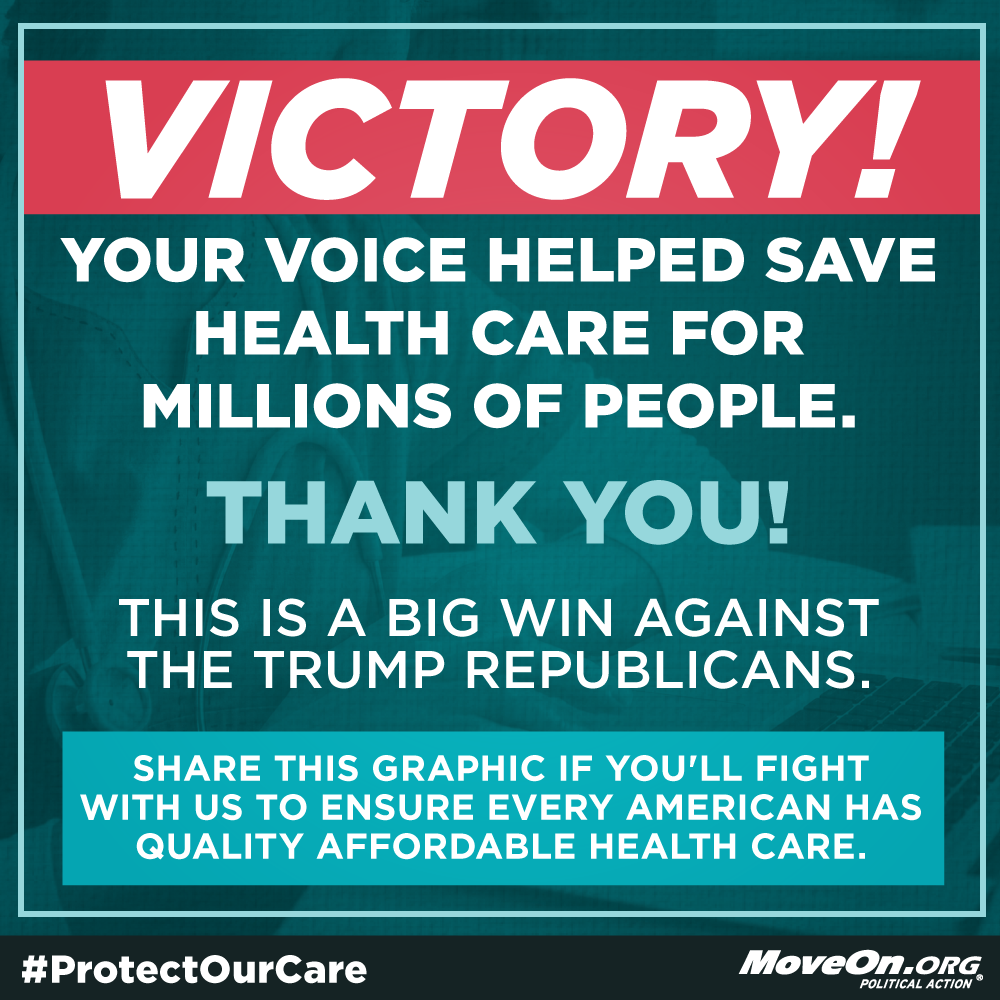 Let's celebrate. We helped stop a morally bankrupt bill that would have taken health care away from 24 million people, defunded Planned Parenthood, and stripped away coverage for basic services such as check-ups for kids, maternity care, and prescription drugs, while increasing costs for most people and giving large tax breaks to the super-rich.

And let's recommit to the fight. We'll need to be vigilant and ready to leap back into action if GOP leaders try to introduce another failed, cruel, destructive effort at ripping away health care from millions of Americans.

The fight against Trump and the GOP agenda, as well as for high-quality affordable health care for every American, continues. And now we have another reminder of just how much the resistance—you!—can accomplish.

We did it! Thank you!

And thanks for all you do.

Or make a one-time gift

Contributions to MoveOn.org Civic Action are not tax deductible as charitable contributions for federal income tax purposes. This email was sent to Eddie Alfaro on March 24th, 2017. To change your email address or update your contact info, click here. To remove yourself from this list, click here.