Our next four national calls are packed with all star speakers including Senators Cory Booker, Kamala Harris, Bernie Sanders, and Elizabeth Warren. Join to find out how to take action as we count down to the mid-term elections.

Thank you for being a subscriber to MoveOn's Sunday night Resist & Win National Organizing Calls.

Donald Trump and Republicans have made a mockery of Congress and our nation's most powerful court. Following a sham investigation, Senate Republicans just now voted to move forward the Brett Kavanaugh nomination to a final vote tomorrow.

We are fighting like hell for the next 24 hours to stop this confirmation. But we also know that we need to hold these Republicans accountable and #VoteThemOut in just 32 days. And we have an opportunity to supercharge our work to end GOP control of Congress this weekend and in the weeks ahead.

This Sunday, we're going to hear from two rising stars: Rashida Tlaib who is a champion of Medicare for All and taking on Big Money and is on her way to becoming one of the first two Muslim women ever to serve in Congress and Ana Maria Archila, co-Director of the Center for Popular Democracy, who courageously confronted Senator Jeff Flake about Brett Kavanaugh as he tried to enter an elevator during the Senate hearings last week.

Because you have registered for our Sunday night national organizing call series in the past, a few minutes before the training begins, you'll receive a call at the phone number you previously listed. No further actions is required, though you can click here to register a different phone number or come back to this link at the time of the call to listen via computer.

Our Sunday night Resist and Win National Organizing Calls are part-training, part rally, part-update, regularly joined by tens of thousands of fellow participants ready to make an impact. We're going into overdrive with an all star line up featuring Senators Cory Booker, Kamala Harris, Bernie Sanders, and Elizabeth Warren, grassroots activists, movement leaders, and more over the course of four calls between now and Election Day. 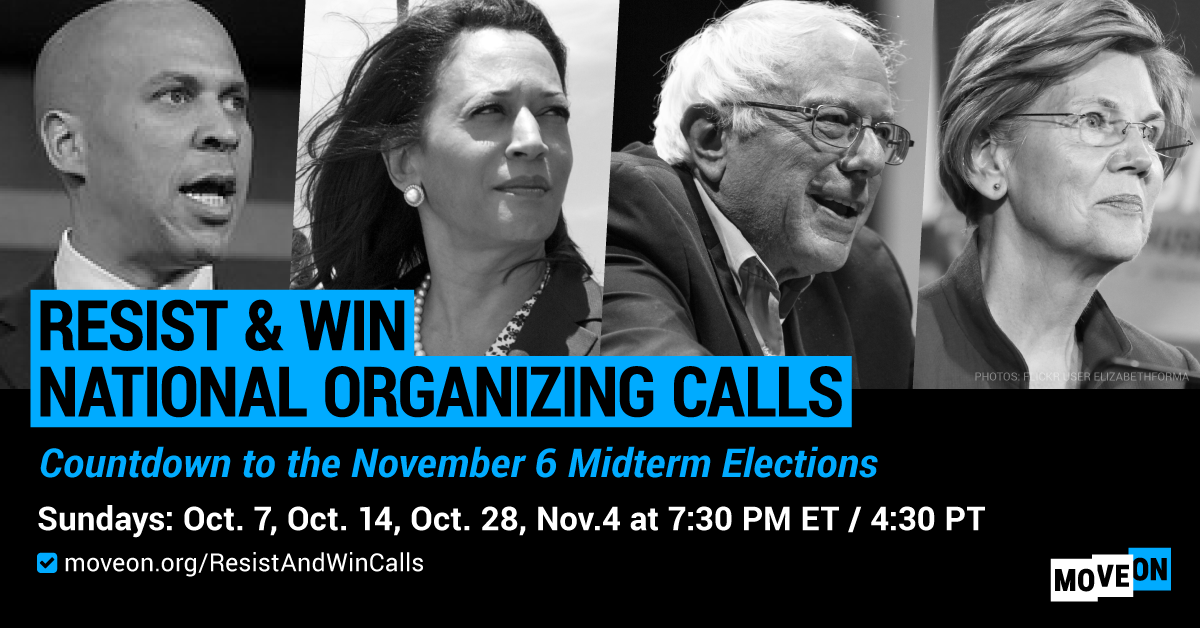 Here are a few of the speakers and topics over the next four Sunday calls, beginning with this Sunday, two days from now.

October 14: Senator Cory Booker will talk about how this election will affect the fight to ensure every American has access to healthcare.

October 28: Senator Bernie Sanders will raise the virtual roof and MoveOn's Election Program Director, Rahna Epting, will lead an exciting call to plug folks across the country into meaningful actions during the final push to end GOP control of Congress.

November 4: Just two days to Election Day, Senators Kamala Harris and Elizabeth Warren will discuss what this election means and how it will shape our nation--when we win!

Click here if you need to register a different phone number, or come back to this link at the time of the call to listen via computer.

It will be wonderful to be together.

Thanks for all you.

—Corinne, Isbah, Chris, Josh, and the rest of the team

Here is what Michael Moore has to say about MoveOn: "MoveOn is working around the clock to help organize and turn out volunteers to get out the vote in November. I know that MoveOn members like you are moving heaven and earth to win this election. We're the majority. But we need to rise up. That's the only way out of this mess." Will you chip in $3 a week to help win this election? (MoveOn will contact you shortly after Election Day to see if you want to modify or cancel your donation.)