Join Sunday's Resist & Win National Organizing Call to hear how you can take action to end Republican control of Congress.

And Ocasio-Cortez and Sanders are the perfect team to lead the "bring-it-home" charge for the midterm elections—on a call where tens of thousands of MoveOn members and allies will gather to learn what must be done in the final nine days to end GOP control of Congress and elect a dynamic slate of progressives at the federal, state, and local levels who will take on this rigged system, stand up to attacks on our communities, and push forward a transformative agenda.

Because you have registered for our Sunday night national organizing call series in the past, a few minutes before the training begins, you'll receive a call at the phone number you previously listed. No further action is required, though you can click here to register a different phone number, or come back to this link at the time of the call to listen via computer. 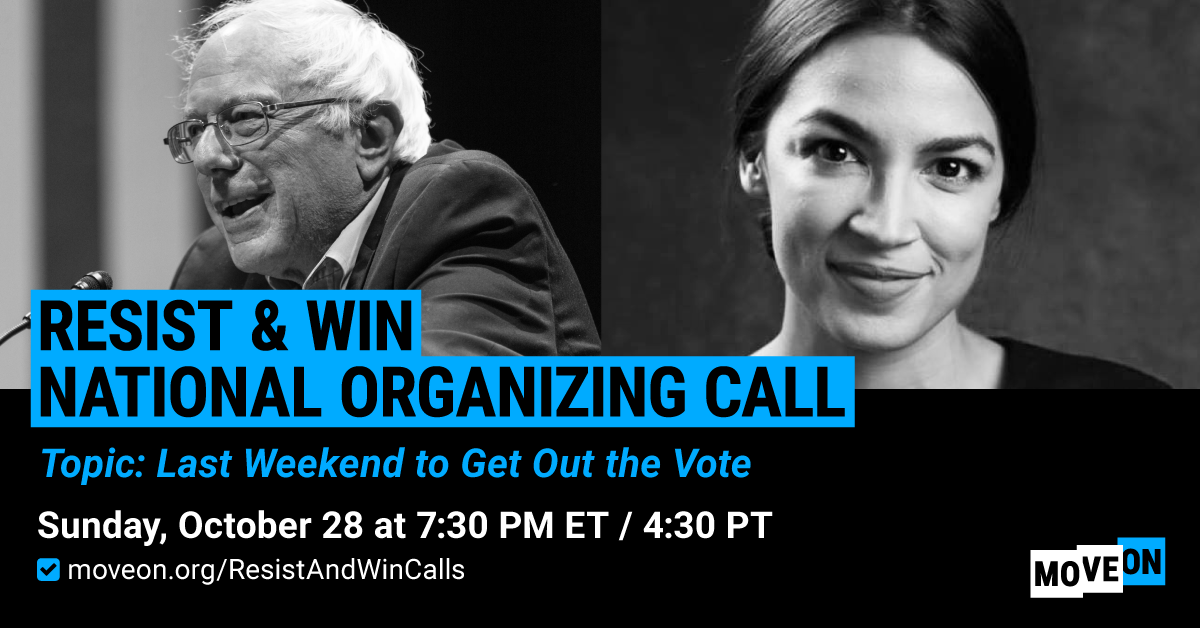 There are just 10 days until polls close across the country. Ten days to do everything we can to win on November 6 and put a meaningful check on Donald Trump. Ten days to elect candidates ready to fight for Medicare for All, fight to keep families together, push back against the interests of Big Money, fight for criminal justice reform and to confront climate change and so much more.

On Sunday's call—MoveOn's 26th Resist & Win call in this Trump era—participants will get an inside look at campaigns across the nation, have a chance to sign up for critical get-out-the-vote events, join MoveOn's massive mobile texting team, hear from a Resist & Win volunteer leader who's helping power a key campaign, and so much more.

Click here if you need to register a different phone number, or come back to this link at the time of the call to listen via computer.

Here's the bottom line: Tens of thousands of MoveOn members have already hit the phones and doors for Democratic candidates. But in these final days, we need a surge of targeted people power to ensure Democrats prevail on Election Day.

A surge of action powerful enough to turn the House (and maybe even the Senate) blue and send a message across the nation that Americans outright reject the politics of fear, greed, and division—and instead embrace the politics of solidarity, opportunity, and common humanity.

Hope you can join Sunday's call.

—Corinne, Scott, Ashley, Mark, and the rest of the team

P.S. If you can't join on Sunday, you can still take action in the final days leading up to the November 6 election to be part of the blue wave. See how to get involved here.

Will you support MoveOn's efforts to win this election? Michael Moore says, "MoveOn is working around the clock to help organize and turn out volunteers to get out the vote in November. I know that MoveOn members like you are moving heaven and earth to win this election. We're the majority. But we need to rise up. That's the only way out of this mess." Will you stand with MoveOn?