Call your senators before they vote today on protecting the Mueller investigation.
Dear MoveOn member,

Breaking news: A bipartisan group of senators will head to the Senate floor today to demand passage of legislation to protect Robert Mueller's independent investigation from Donald Trump's interference. Democrats and Republicans have already passed this bill through committee and will try to force a full Senate vote today.

Can you call your senators right now to ask them to vote yes on S.2644, the Special Counsel Independence and Integrity Act, to protect the Mueller investigation from Trump, his crony newly placed in the Justice Department, and any other interference?

You can say: All senators must vote yes on S.2644, the Special Counsel Independence and Integrity Act, to protect the Muller investigation.

This is a fast-moving story.

One week ago, as America was waking up to a blue wave that elected a progressive slate of Democrats into Congress and ended Republican control of Washington, Donald Trump wasted no time installing acting Attorney General Matthew Whitaker at the Justice Department. Whitaker will almost certainly act to undermine Robert Mueller's independent investigation.

MoveOn members, in turn, wasted no time in responding, and that night, crowds of Americans from all backgrounds and walks of life stood up to declare, "Nobody is above the law."

From massive turnout that filled city blocks in New York (you've got to see the aerial photo included below), to crowds in Sarasota, Charlottesville, Denver, Bellingham, and on and on and on. And the signs! Let's just say that you all are a creative bunch :)! More than 100,000 people and hundreds of events to demand that the new acting Attorney General Matt Whitaker recuse himself and that Congress act to defend the independent Mueller probe from Donald Trump.

To get a sense of the scale of these protests, just watch this short video someone posted on Twitter from above Times Square—and make sure to have the volume turned on so you can chant along, "One-two-three-four // Nobody's above the law!" 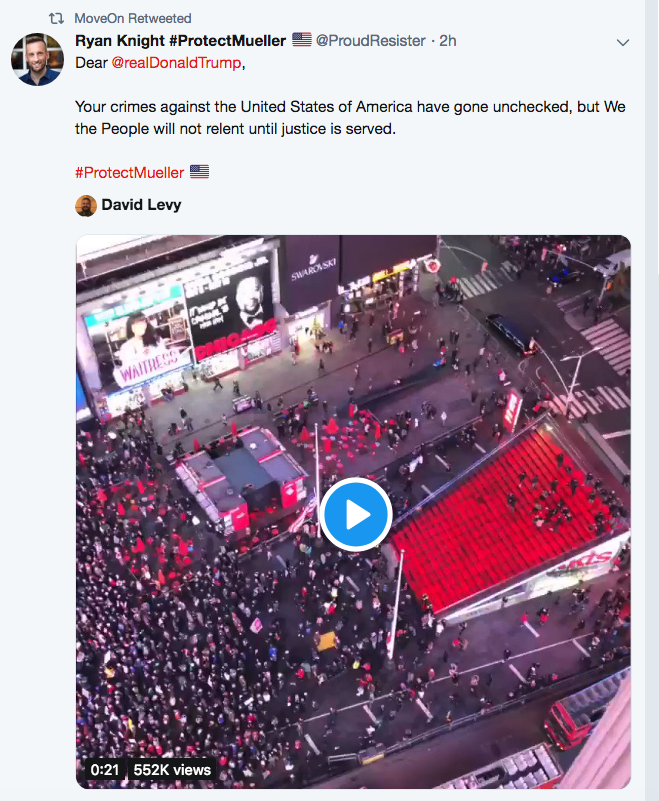 The crowds were so immediate, so national, so resounding that even the White House is reportedly taken aback by how vocally their move to quash the investigation is being rejected, suggesting Whitaker's role running the Department of Justice may be short-lived.1 And Senator Jeff Flake announced that he and Senator Chris Coons would force a roll-call vote on the "protect Mueller bill" when the Senate reconvenes.2 Donald Trump floated a trial balloon for authoritarianism, and we just popped it. Our actions are playing a critical role in shaping the response to this power grab.

Senators Booker, Coons, and Flake are pushing for the Senate to take action today! Can you make a call?

Donald Trump thought he could catch us when we had no energy left to march against his power grab after we had just marched to the polls. But he was wrong. And the fact that so many members of Congress were home for the election meant that many events featured speakers who have the power to hold Trump accountable, such as Representative Elijah Cummings, who spoke to a crowd of 800 in Baltimore, Representative Pramila Jayapal in Seattle, or Senator Michael Bennet in Denver.

This was the culmination of one action but just one step in another, longer march toward justice and freedom. Whitaker could meet our demand tomorrow, or he could attempt to fire Mueller today. Mueller's findings of criminality could come out, or Trump could suppress them. This month, Congress could act to defend Mueller—or in January, a new Democratic chair of the Judiciary or Intelligence committees could bring incredible focus to finally getting at the truth.
We will keep pushing. If Trump crosses another red line—firing Mueller or pardoning one of the key people of interest including, potentially, his own son—we'll likely take to the streets again. In the meantime, we're taking to the phones, the airwaves, and social media to push Republicans to finally stand up to Trump, as well as to push Democrats to hold true to their promises of protecting and furthering investigations.
Please. Take five minutes and make your calls right now. MoveOn members will keep the pressure on Trump and Whitaker, but we must also pressure Congress to act responsibly in the face of this constitutional crisis.

You can say: All senators must vote yes on S.2644, the Special Counsel Independence and Integrity Act, to protect the Muller investigation.

—David, Maria, Ryan, Kate, and the rest of the team

P.S. Today, we're launching a much-anticipated tactic: GUILTY PLEAS-URES, D.C.'s first investigation-themed ice cream and dessert truck. This MoveOn member-funded project is meant to be an attention-grabbing, media-friendly, social media-attractive, and delicious way to break through the Trump noise and remind folks how impactful the Mueller investigation has been. For the next few weeks, it will will be touring Washington, D.C., scooping out free ice cream while serving up the truth about how many guilty pleas, guilty verdicts, and indictments have already come from Mueller's work.
Here's an image of the truck—and follow it on Twitter @GuiltyPleas_urs if you want to see it making its mark in D.C. 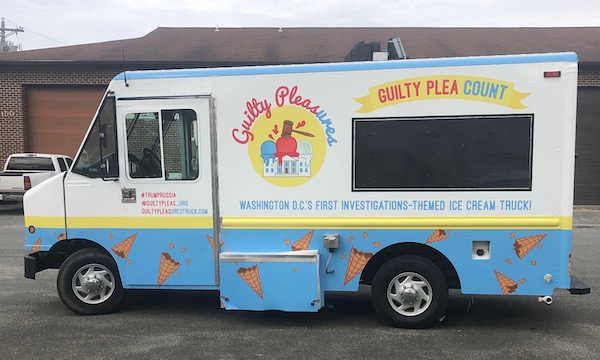 Want to support our work? The MoveOn community will work every moment, day by day and year by year, to resist Trump's agenda, contain the damage, defeat hate with love, and begin the process of swinging the nation's pendulum back toward sanity, decency, and the kind of future that we must never give up on. And to do it we need your support, now more than ever. Will you stand with MoveOn?

Contributions to MoveOn.org Civic Action are not tax deductible as charitable contributions for federal income tax purposes. This email was sent to Eddie Alfaro on November 14, 2018. To change your email address or update your contact info, click here. To remove yourself from this list, click here.