On Tuesday, with your help, New Yorkers will elect a wave of progressives who can — AND WILL — transform our politics.

I'm writing to ask you to cast your vote on the Working Families Party ballot line in New York.

A year ago, I shared my story of sexual assault. I did so because I wanted to create a better world for my sweet daughter Elizabella. One where she would never have to say #MeToo.

This is a very important time in our nation's history. We have a man in the White House who bragged on tape about sexually assaulting a woman. Whose words have promoted acts of violence and bigotry. And we have a Republican Party—in Washington, D.C. and Albany—that has supported assaulters, attacked reproductive rights, and refused to shake up the old boys' club. That all changes now.

Tomorrow, with your help, New Yorkers will elect a wave of progressives who can and will transform our politics. Your vote on the Working Families Party line for statewide offices up and down the ballot—governor, attorney general, and where possible, Congress, state senators, state assembly members, and even local offices—will send a powerful message about our values and what we expect from our elected leaders.

Will you commit to vote on the Working Families Party line in New York tomorrow and to call voters to remind them to vote, too?

We've seen what Republicans in Washington have done to harm women. For too long, Republicans in Albany have stymied progress for women too. They've prevented the passage of the Reproductive Health Act, which would codify Roe v. Wade into law, and they've blocked an entire progressive agenda that would put women and working families first.

Tomorrow, your vote on the Working Families Party line all the way up and down the ballot will help elect progressives to office while sending a powerful message: Women and working families should come first.

Say you'll #VoteWFP tomorrow in New York, for statewide offices and, where you can, down the ballot. And sign up right now to call voters to remind them how important it is that they vote, too. 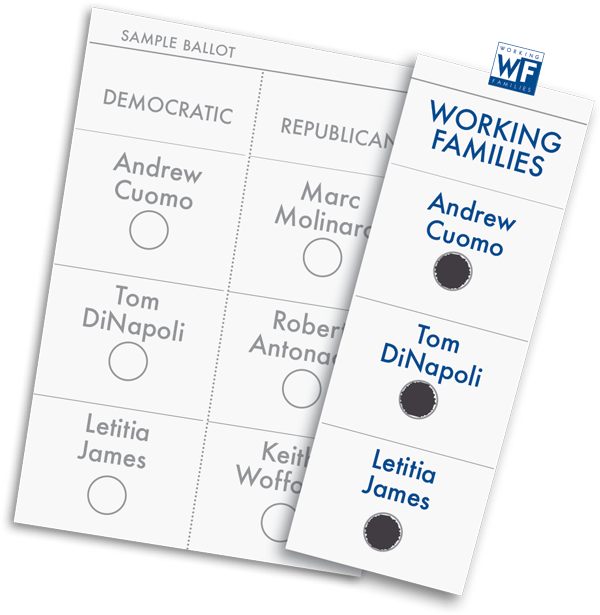 P.S.MoveOn members have also endorsed candidates for Congress and State Senate across New York, many of whom you can vote for on the WFP line—click here to see all of the candidates MoveOn members endorsed in New York.

PAID FOR BY MOVEON.ORG POLITICAL ACTION, pol.moveon.org. This communication was not expressly authorized or requested by any federal, state, or local candidate, or by any candidate's political committee or any of its agents.