Every Democratic and Independent senator, along with 14 Republican senators, voted the right way on Yemen.

Last night, the U.S. Senate voted to advance a bipartisan war powers resolution that would force the Trump administration to end U.S. military aid for the horrific Saudi-led war in Yemen.1

This stunning grassroots win is a rebuke of the Trump administration's increasingly alarming relationship with Saudi Arabia and its hawkish foreign policy posture. And it comes after the Trump administration's attempt to block the vote by sending Secretary of State Mike Pompeo and Defense Secretary James Mattis to have a private briefing with senators in the morning.

But the administration couldn't stop it.

A bipartisan group of senators—including every Democratic and Independent senator and 14 Republican senators—voted to discharge the resolution.2 This means that in the coming week, the Senate will be able, for the first time, to debate and vote on a check on Trump's war-making in Yemen and disrupt the U.S.'s unconscionable support of the Saudi regime after crucial grassroots pressure.

That's why it's critical MoveOn members send a message to Congress now—to keep up momentum in the Senate in advance of the upcoming debate and vote and to push for new House leadership to take up this fight in the new year. Please add your name to the petition calling for Congress to end U.S. support for the war in Yemen if you haven't yet.

The vote was 63-37 in favor of discharging the resolution and having a debate on the U.S. support of Saudi's war in Yemen. 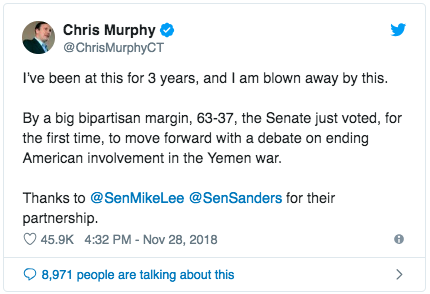 That is a huge bipartisan rebuke of the Trump administration's ongoing policies supporting Saudi Arabia at all costs, despite allegations of war crimes in Yemen by the United Nations and the killing of Washington Post journalist, Jamal Khashoggi.

But the work isn't done.

The Senate could be debating and voting as early as next week to officially pass the War Powers Resolution. And then, the House will also need to vote in the coming months. Can you sign the petition to Congress to show your support for ending the inhumane war in Yemen?

For nearly a year, MoveOn members have doggedly channeled widespread outrage about the nearly four-year Yemen war and mounting humanitarian crisis in the region that is leaving millions on the brink of famine. In just the past few months, MoveOn members have made over 6,000 calls to Congress and generated tens of thousands of signatures on petitions to hold Saudi Arabia accountable and end U.S. support for the war in Yemen.

In March, MoveOn led an action laying nearly 5,000 flowers on the Capitol Hill lawn to symbolize the number of children that have been killed in this man-made crisis so far. Recent reports show that number could be as high as 85,000 Yemeni children killed, making this rebuke of U.S. military involvement all the more important.3 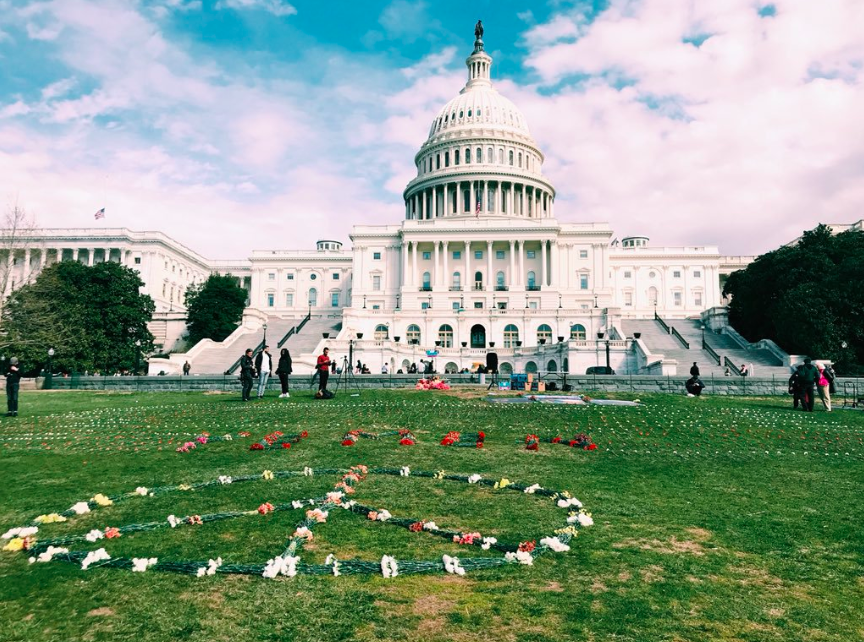 Now, it's critical that MoveOn members act immediately to build on this historic victory to pressure the Senate and the House—especially as Democrats take the majority in January—to follow through on this vote and take action. Sign the petition to show your support.

This is historic. What's next?

The Senate overwhelmingly tackling the hurdle to discharge the Yemen War Powers Resolution is one clear step toward establishing a new global policy in the United States to keep the United States accountable for the powers we hold on the world stage.

For too long, our global policies have been based around the interests of weapons manufacturers, detrimental alliances with those who are committing human rights abuses, and xenophobia and anti-Muslim racism that scapegoats some of the most vulnerable communities in the country.

As Representative Ro Khanna points out, even the backlash on the Yemen War Powers Resolution in the House has been in part due to the defense industry fearing they will lose Saudi Arabia as a client. 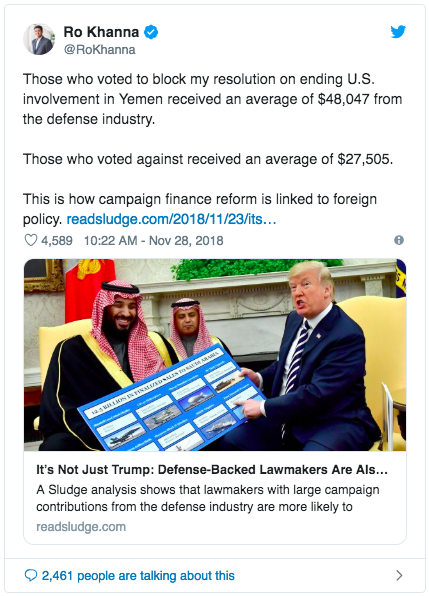 As strong bipartisan groups of senators and congresspeople act on reclaiming their war powers to rebuke Trump on Yemen, now is the time to work toward a truly progressive global policy.

A policy that is focused on diplomacy, not war.

A policy focused on humanitarian relief, not weapons sales to countries with horrific human rights abuses.

A policy focused on the freedom of mobilization for those seeking asylum and safety, not racist bans or border walls.

A policy focused on world cooperation and working toward global solutions to global problems like climate change, not isolationism.

A policy focused on reallocating the bloated Pentagon budget toward domestic needs like health care or free college, not wasting trillions more on endless wars.4

As Democrats take the House in January and we push our values into the center of the political discussion through 2020 and beyond, there is an opportunity in the next two years to set up what this progressive foreign policy looks like.

In the immediate future, this includes making sure the House and Senate pass a Yemen war powers resolution, with a debate and vote happening as early as next week in the Senate. This would be the first time Congress would be reclaiming their war powers and categorically putting an end to the U.S. military involvement in the inhumane attacks in Yemen.

For now, can you co-sign your support for ending U.S. military involvement in Yemen and make sure Congress acts?

Every single MoveOn member, like yourself, has a role to play in the historic shift that is possible.

–Iram, Robert, Michael, Kate, and the rest of the team

Want to support our work to build a progressive foreign policy? For too long, our global policies have been based around the interests of weapons manufacturers, detrimental alliances with those who are committing human rights abuses, and xenophobia and anti-Muslim racism that scapegoats some of the most vulnerable communities in the country. Now, we have a chance to start changing that. Will you stand with us and start a weekly contribution today?

Contributions to MoveOn.org Civic Action are not tax deductible as charitable contributions for federal income tax purposes. This email was sent to Eddie Alfaro on November 29, 2018. To change your email address or update your contact info, click here. To remove yourself from this list, click here.