Tomorrow is a big day. A huge day. It's unquestionably the most important midterm election of my lifetime.

Tomorrow is a big day. A huge day. It's unquestionably the most important midterm election of my lifetime. And we've been working toward it since the minute Trump was elected on that awful night two years ago. I want to share with you some of what I've personally seen in the field and what MoveOn members have been sharing—and ask you to do what you can over the next 30+ hours to turn out every vote possible for this election (in addition to making sure you have your own plan to vote!).

We're so close to the finish line, and if we do our work, victory is in sight. Dozens and dozens of elections could be decided by single percentage points, so the work we do as volunteers will make the difference. Whether it's going door to door to talk to our neighbors or making calls to ensure folks have a plan to vote, it's one-on-one conversations that ultimately win elections.

I went canvassing for Sean Casten, running for Congress in Illinois, this weekend—and I was just one of the thousands of MoveOn members across the country who were doing the same in more than 100 House races, plus Senate and gubernatorial races and state and local campaigns. MoveOn members are fired up, determined, and committed to seeing this election through. We're pouring our time, energy, and hearts into the core work of turning out voters.

For example, here are MoveOn members hitting the streets to help send Beto O'Rourke to the U.S. Senate: 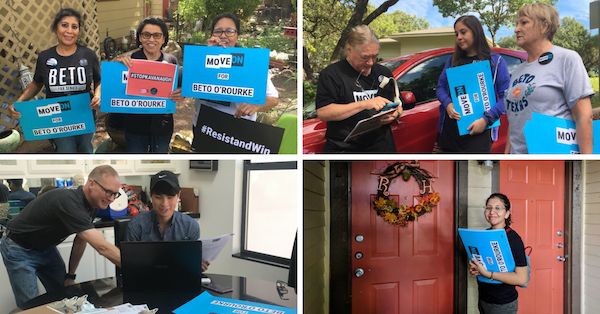 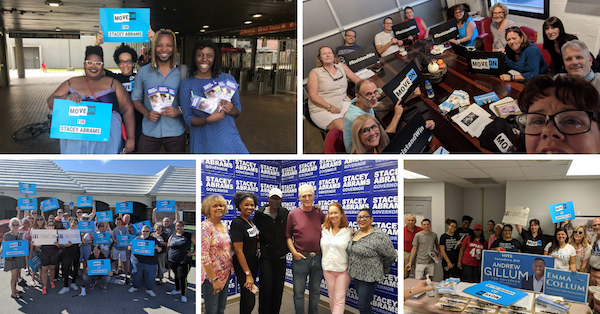 And here's me, with my colleagues Anna and Ilya (MoveOn's executive directors), knocking on doors for Sean Casten in the suburbs of Chicago: 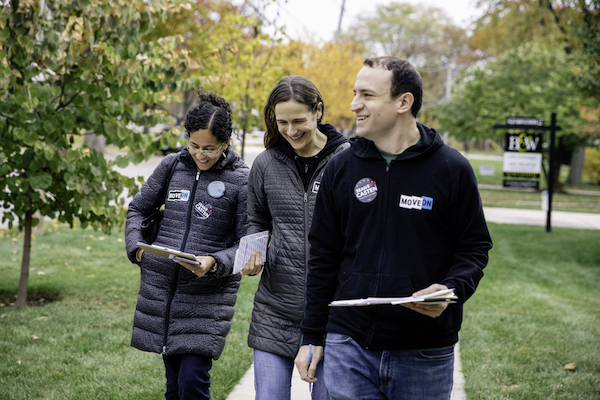 These conversations across districts that will be decided by the slimmest of margins are the ones that could end Republican control of Congress and usher in a new generation of progressive, diverse, brave, game-changing elected officials.

I believe that we can win tomorrow—and win big—but nothing is guaranteed, and it all comes down to what we all do over these next 30+ hours. Whether you've been campaigning ceaselessly or you're looking for a last-chance way to plug in, this is your moment. And I've got four suggestions:

Together, we've built something extraordinary. MoveOn member leaders have organized one thousand Wave events, where MoveOn members come together to campaign. We've knocked on tens of thousands of doors and made hundreds of thousands of calls. Our text team volunteers have sent 35 million—35 MILLION!—texts. (That's not a typo). And MoveOn members have donated $4.4 million to progressive candidates, including over $1 million to Stacey Abrams.

I'm so inspired by all of you—the individual stories I hear from the field, and the big picture of what we've managed to build. So I wanted to share some of that with you ahead of tomorrow.

First, let me tell you about some of our member leaders. There's Gil in Texas, who remembers being bulled for his race in school and is campaigning flat-out for Beto O'Rourke so that other students don't have to suffer the way he did. Kim, a single mom living with multiple sclerosis who gained health insurance thanks to the ACA and is now helping organize for Katie Porter in California. And K.L., a member of our volunteer text team who doesn't have use of his arms and legs but has used voice recognition and adaptive technology to send over 13,000 texts using his chin.

These folks are among the thousands of MoveOn members like you who are fighting hard, knocking doors, calling voters, chipping in, and doing everything they can to end Republican control of Congress. We've done so much to show Trump and his fellow Republicans that we won't stand for their attacks on our communities. We are here, we are organizing, and we are ready to kick them out.

Everything we've worked for comes down to tomorrow. I'm so proud of all the work we've already done together, and now it's time to bring it home. Just to recap, here are the four things you can do:

–Rahna, Mikey, Alechia, Brian, and the rest of the team

Will you support MoveOn's efforts to win this election? Michael Moore says, "MoveOn is working around the clock to help organize and turn out volunteers to get out the vote in November. I know that MoveOn members like you are moving heaven and earth to win this election. We're the majority. But we need to rise up. That's the only way out of this mess." Will you stand with MoveOn?